Nearly half of NYC's shootings gang-related 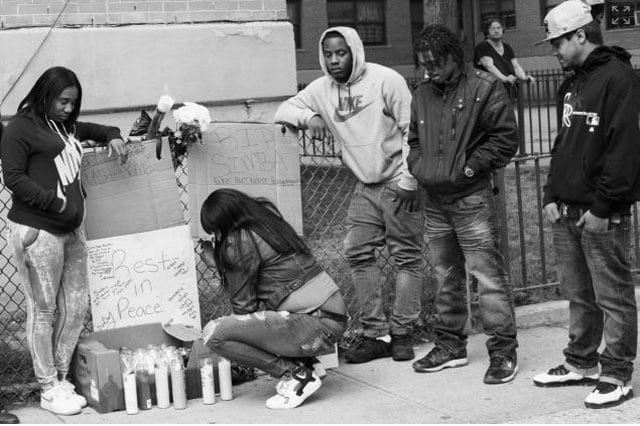 Friends and fellow gang members gather around a makeshift memorial where a young man died after being stabbed 20 times in the chest. (Photo: Nicolas Enriquez / New York Daily News)

Of the more than 300 homicides so far this year in New York City, almost half of those – 40 percent – were determined to be gang-related, with 49 percent of the city’s nearly 1,100 shootings tied to gangs as well.

Law enforcement officials in the Big Apple say homicides are up, though overall crime is slightly down, but the beefs between rival gangs are erupting more commonly over seemingly petty offenses. The city’s 375 gangs – most of which are huddled around housing projects – are typically at war over drugs, money and turf, but a great deal of the gang-related shootings also stem from the notion that a boy becomes a man once he puts a bullet in another person.

“It’s a fearsome reality: violence for its own sake,” Police Commissioner Bill Bratton told the New York Daily News, who published a special report Sunday on the city’s gang violence. “The gun has come to define manhood for these young men, and the willingness to use it has become a rite of passage.”

Data obtained by the Daily News from the NYPD’s Gang and Juvenile Justice divisions indicate that gang members may be as young as 10 years old, with most members in their teens and early twenties. Those who survive the lifestyle long enough often have extensive criminal records by their 30s. 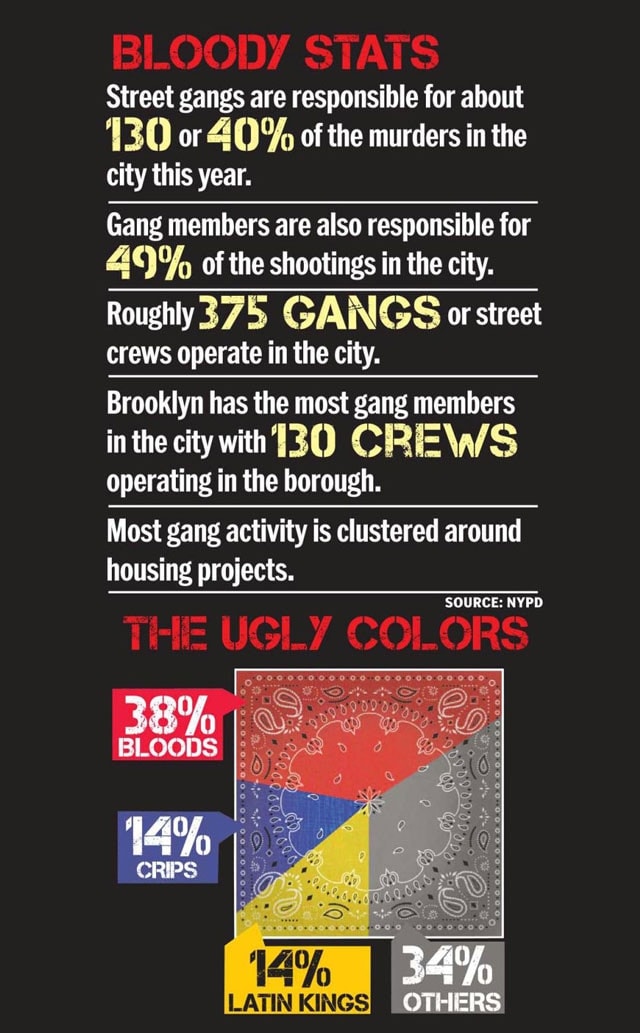 But authorities have seen first hand how taking down gangs all but eliminates violence from the area. With constant fights over turfs – which are often just spitting distance from one another – and the lingering threat that a gang member – or their family members – will likely get shot for setting even one foot on another turf, it isn’t difficult to see why. Throw in the mix old beefs and money made from the growing heroin epidemic and blooming credit card fraud business, it leaves the gang territories with a volatile recipe for disaster.

Deputy Chief Kevin Catalina, the commanding officer of the NYPD Gang Division, made reference to a massive bust in June 2014 in which 100 members of three separate gangs were put behind bars following an extensive investigation. Almost immediately, the regular shootings and violence ended at the two housing projects which were at the center of the dispute between the gangs.

Even over a year after the arrests, the area still remains essentially free from violence, Catalina noted.

“We took down that core group and completely eliminated the violence over there,” he said. “There has been one shooting incident over there that we are aware of, and we don’t know if it’s gang-related.”

Catalina said there is a “direct correlation” between the gangs and the violence, and once those gangs are taken down.

“The residents are much happier … they’re sending their children outside to play again,” he said.