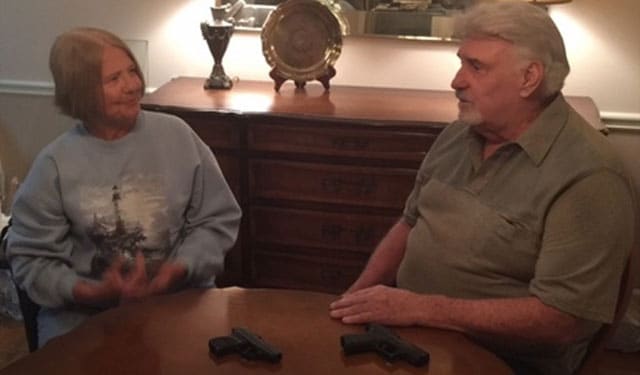 Ron Childress (right) said the incident was a perfect example of how an armed citizen can protect another citizen. (Photo: Fox 5 Atlanta)

A vicious attack against an elderly man in Lawrenceville, Georgia, last week came to an abrupt end after two witnesses – both armed with handguns – intervened.

Karen Duncan was on her way to visit a friend Monday, Dec. 7 when she heard cries for help as she walked up her friend’s driveway.

“Help, he is trying to kill me, help me, help me,” Duncan told Fox 5 Atlanta were the words being yelled by the man.

Duncan retrieved her friend, Ron Childress, and her purse — which contained her handgun — then sprang into action.

“She kind of started running towards the house,” recalled Childress. “I could tell something was wrong and she hit the doorbell in a panic.”

Then, when Childress opened the door, he heard the same frantic pleas for help, but Duncan was already on her way to assistant the man crying for help. As she got closer, she realized there was an elderly man, reported to be about 90 years old, lying on the ground with a younger man on top of him, holding a knife. The knife was covered in blood.

“I see blood and this big old knife,” Duncan said.

Duncan, gun in hand, instructed the knife-wielding man to stop, but initially he failed to comply with her commands.

“Finally I said, ‘I’m getting ready to shoot you,’” Duncan recalled.

At that point, the suspect decided to listen, stopped, turned to look at Duncan, then tossed the knife to the side.

By that time, Childress, a former law enforcement officer who was also armed, showed up to join Duncan. Childress instructed the suspect to spread his arms and legs, stay still and wait. The suspect opted to listen without another warning. As Childress kept his gun trained on the suspect, Duncan called 911.

Childress said he believes if Duncan had showed up any later, the elderly man would have been dead.

“You cannot protect everybody. Police can’t do it. They’re good after the fact, but they’re no good to you when it happens generally,” said Childress. “They’re not going to be there so you need to be ready to protect yourself and others.”