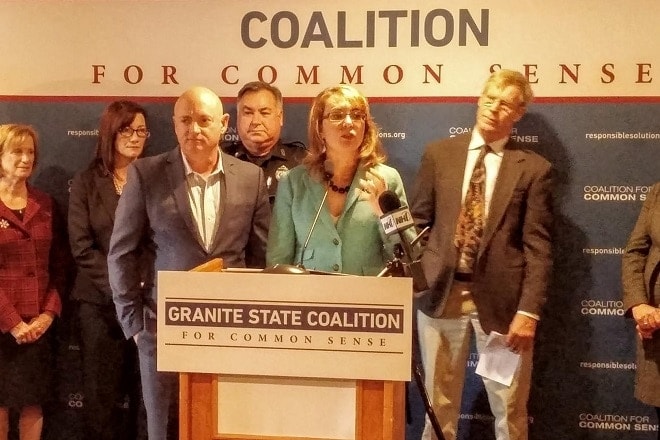 Gabby Giffords and Mark Kelly were on hand in New Hampshire this week to debut a new group with the aim to bring universal background checks to the state. (Photo: New Hampshire Public Radio)

New Hampshire is now home to a brand new gun control group, set up with the help of former U.S. Rep. Gabby Giffords, in an effort to expand background checks.

Giffords and her husband, former astronaut Captain Mark Kelly, announced the organization, the “Granite State Coalition for Common Sense,” at press conference Tuesday. The gun safety advocates argue New Hampshire has a number of loopholes in their gun laws that need to be addressed, prompting the need for the local group.

“We have a gun violence problem in our country that makes us stand out in the worst of ways,” said Kelly in a statement. “We have to do better – and we can. We’ve all seen the bumper sticker: ‘Guns don’t kill people. People kill people.’ It’s true. And that’s exactly why our leaders need to do more to keep guns out of the hands of dangerous people and protecting the rights of law-abiding gun owners like Gabby and me. It’s the responsible thing to do.”

Among the initiatives backed by the new group is to expand background checks to include most private gun transfers and increased reporting of mental health records by the state to the Federal Bureau of Investigation’s National Instant Criminal Background Check System.

Some question the need for more gun laws in a state that seems to be managing its crime problem with its enforcement of current regulations.

State Rep. J.R. Hoell, a Republican, contends New Hampshire has some of the lowest crime rates in the country and the data would tend to agree, suffering just 12 reported homicides in 2014 according to statistics from the FBI, half of which were committed with weapons other than firearms. The only state with a lower rate is neighboring Vermont, which has half the population of the Granite State.

Further, Hoell argues an expansion of checks is a slippery slope to weakening the Second Amendment, saying, ““Universal background checks will lead to registration, which will lead to gun confiscation. Period.”

While the new group cited a recent poll that found 89 percent of New Hampshire voters support background checks on all firearm purchases, the state has actually moved to strike restrictions on gun laws in recent years with a popular measure to bring unlicensed concealed carry working its way through the legislature only to be met with a veto from Democrat Gov. Maggie Hassan at the urging of national gun control groups.