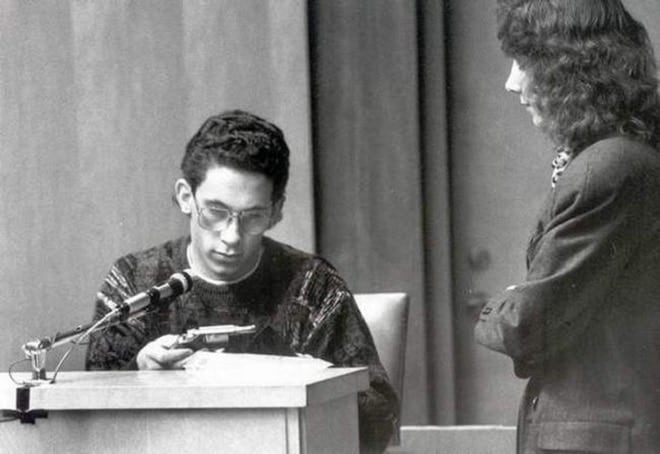 Vance “J.R.” Lattime Jr. during the 1991 Pamela Smart murder trial, shown holding the .38 Charter Arms revolver used in the killing. While Lattime himself was freed in 2005, the gun, stolen from his father, is still on ice. (Photo: Portsmouth Herald)

A gun owner whose revolver was used in the conspiracy of New Hampshire teacher Pamela Smart to kill her husband was told he won’t be getting his gun back.

Now the owner of the .38 Charter Arms snub nosed used in the crime, Lattime’s father, Vance Sr., was denied a motion by the Rockingham Superior Court to recover the gun stolen he turned over to police over two decades ago as reported by Foster’s Democrat.

Judge Andrew Schulman told Lattime in his Dec. 10 ruling the firearm needed to remain in police custody should it be needed for future study as Smart has in the past filed multiple appeals in her case. The former school media coordinator is serving a mandatory lifetime sentence without the possibility for parole while advocates on her behalf maintain she was wrongly convicted.

“The police have had my property for over 25 years and now I am asking the court to order that the state of New Hampshire return my property to me,” said Lattime, who has been seeking to get the gun back for over a decade.

His attorney feels the state’s case to maintain the weapon as evidence is thin.

“Pamela Smart lost her trial, has exhausted her direct appeals… and she was unsuccessful in her state habeas claims and federal habeas claims,” Lattime’s attorney Mark Stevens wrote in his court filing. “While Pamela Smart could, hypothetically, repastinate the same claims of error… this is not a valid legal basis for keeping Mr. Lattime’s property from him any longer.”

Smart is the only defendant in the case still behind bars. Flynn, sentenced originally to life in prison, was released after nearly 25 years this summer on his 41st birthday. His three accomplices were likewise paroled between 2005 and 2015.

The murder and its salacious details were the basis for the television film Murder in New Hampshire: The Pamela Wojas Smart Story, starring Helen Hunt as well as for Gus Van Sant’s film To Die For, starring Nicole Kidman and Matt Dillon as the married couple, and Joaquin Phoenix as the wife’s lover.