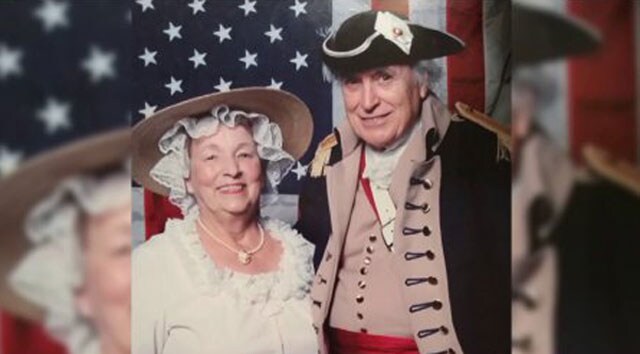 Fred Kaffenberger and his wife, Wanda.

An 80-year-old U.S. Marine Corp veteran, who was dressed in a full Revolutionary War uniform, suddenly collapsed and died while placing wreaths on the graves of veterans at Leavenworth National Cemetery Saturday.

Fred Kaffenberger became a history and civics teacher after retiring from the military, and his family said he loved teaching. Kaffenberger also loved history and had researched his family’s genealogy, only to find out that he had an ancestor who fought in the Revolutionary War. For Kaffenberger, that meant he could join The Sons of the American Revolution and wear the historical uniform.

“It was the connection with the past, George Washington was his hero,” said his wife of 48 years, Wanda.

She said he was proud of his heritage and would wear the uniform every chance he got.

“It was something he was proud to do, he didn’t feel silly, didn’t feel ridiculous. He felt like he was helping educating this country,” Wanda explained.

Kaffenberger showed up in the uniform for Wreaths Across America, but as he placed the final wreath, which was on top of the grave of his son-in-law, he collapsed and died. His family, who appears to be at peace with his death, said that he was just gone, and at this point, doctors don’t know the exact cause of his death.

“This is the way he would’ve chosen to go,” Wanda said. “Wouldn’t you want to go doing what you love to do and go in an instant? Yeah I would too.”