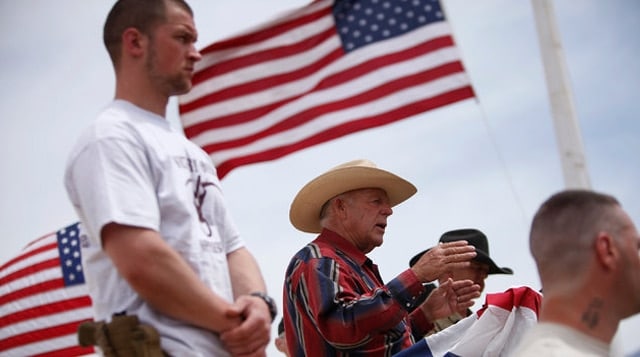 A Seattle man with ties to the so-called patriot movement and who allegedly made threats to kill government officials was arrested earlier this month for possessing an unregistered rifle with a barrel less than 16.5 inches.

Schuyler Pyatte Barbeau, of Springdale, Washington, was charged with possession of a short-barreled rifle, according to the criminal complaint filed Dec. 2. Under federal law, a rifle that has a barrel less than 16 inches must be registered with the National Firearms Registration and Transfer Record.

A confidential informant told the Federal Bureau of Investigation that Barbeau was always armed with a .45-caliber pistol and kept the SBR chambered in 5.56, body armor and a helmet in his car, the complaint says.

Barbeau invited the informant over to his trailer on Oct. 19 to discuss selling the SBR, which he was willing to let go with a longer barrel, holographic optics and other accessories, for $5,000. He then asked the informant to find a buyer and take pictures of the rifle.

The informant said that Barbeau frequently told him that it was his duty to educate public servants who were not living up to their oath and discussed “lynching” those he deemed unworthy if necessary, the complaint says.

In one instance, Barbeau told the informant that he and other like-minded individuals would physically remove a California judge presiding over a misdemeanor weapons violation he received in the fall of 2014, the complaint says.

After federal agents received the tip, they began an open source investigation into the matter, i.e. searching Facebook.

On Barbeau’s social media page, he had a number of pictures of firearms, including the SBR, the complaint says. A number of the comments by Barbeau and friends about the pictures identified the rifle as being an SBR.

Barbeau contacted the informant via telephone on Nov. 3 to talk about the sale and told him he wanted to use the money to buy a rifle chambered in 7.62, which he believed would be “more effective in shootouts with law enforcement,” the complaint says. A few days later, on Nov. 8, the informant met with Barbeau and informed him he had a buyer. Barbeau said he would consider the offer.

Barbeau contacted the informant on Nov. 20 via a private Facebook message to say he was ready to sell the SBR and they arranged to meet on Nov. 22. That day, Barbeau dropped off the gun at the informant’s house and told him to get him the money as soon as possible. Later that day, the informant contacted agents with the FBI, who took possession of the SBR.

On Nov. 24, the FBI collaborated with an agent of the Bureau of Alcohol, Tobacco, Firearms and Explosives, who certified that the rifle had a barrel less than 16 inches and said that it needed to be registered, which it was not, the complaint says.

A federal judge decided to keep Barbeau in custody following his initial hearing because of his alleged threats to government officials.

Along with the threats, federal investigators believe he may have access to explosives, which they searched his trailer for but did not find, local media reported.

Also, Barbeau’s arrest was mentioned during an FBI press briefing on terrorism last week, indicating that he’s being treated as a suspected terrorist. Agents with the FBI’s Domestic Terrorism Squad on the Joint Terrorism Task Force, Seattle office, investigated the case.

A review of Barbeau’s Facebook page shows posts supporting an “armed revolution” and a presumption that the country is on the brink of revolution.

“It will never be to (sic) late for an armed revolution to restore the republic,” Barbeau wrote in a Dec. 5 Facebook post, and then incorrectly identified Thomas Jefferson as the author of the Second Amendment.

In a Dec. 4 Facebook post, he described police as being part of the problem and “among the enemy.”

“These murderers call themselves sheepdogs and there they are killing their own sheep. Law enforcement is a least honorable profession,” he wrote.

Barbeau posted several videos showing him with a rifle patrolling the border, watching Mexican soldiers through a scope as they went about their business, and squatting 275 pounds.

“Nay, war against our government is inevitable. Things are going to happen soon and before election. It doesn’t matter if obama is still in office or not and if he declares martial law. Revolution will happen. Don’t be fooled, it will not be civil war. It will be revolution,” he said in a Nov. 16 Facebook post, a day in which actions had no significant impact on the debate over firearms or public policy.

The Southern Poverty Law Center has raised awareness of Barbeau’s arrest because of his anti-government sentiments and ties to Cliven Bundy, a Nevada cattle rancher who was the subject of controversy when his protest of federal officers attempting to remove his cattle from federal land escalated to a standoff. Bundy claimed rights to the federal land while federal officials said he owed grazing fees.

Bundy received praise from conservative politicians and media until he suggested “the Negro” would be better off as slaves.

A photo of Bundy with Barbeau, armed with a handgun, standing beside him was circulated by Barbeau and the Associated Press, among other photos with the two, shared by supporters named in the complaint against Barbeau, leading some to the assumption that Barbeau acted as a bodyguard for the rancher.

In response to the arrest

Some of those who know Barbeau have spoken out against his arrest by either playing down his initiatives or supporting them.

Following the initial hearing, Barbeau’s mother, Stacy Milam, told reporters, “I raised him and he has very very strong principles,” she said. ” He’s out to fight against something that is way bigger than he is. I am proud of him, I am so proud of him.” She added that he sometimes gets caught up in inflammatory rhetoric.

However, a supporter of his, Jason Patrick, had a different attitude.

“What Schuyler realizes is my government is going to violate constitutional rights and they are going to shoot. I better be prepared,” Patrick said.

Others who support him online have shared a meme that suggests he has a righteous cause. “Uphold your oath. Even if it mean being targeted, illegally arrested and held as a political prisoner. Schuyler Barbeau did. He’s being held by the FBI right now,” the Internet meme states.

Correction: We reported incorrectly that federal requires a rifle with a barrel less than 16.5 inches to be registered. The story has been updated.