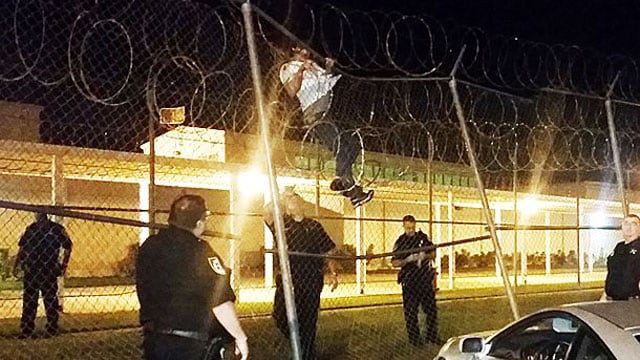 A 24-year-old man is in police custody as he recovers from injuries he sustained from a car wreck and attempting to scale a razor wire fence outside of an Indian River County jail, all so he could go visit his friends on the inside.

According to authorities in Vero Beach, Florida, in an attempt to get inside the jail Patrick Rempe drove his car straight into the front of the building and narrowly missed a deputy who was standing outside. Rempe, apparently realizing he couldn’t get in that way, then slammed his car in reverse and drove into a security fence instead.

Moments later, Rempe jumped out of his car and attempted to scale the razor wire fence, which, of course, didn’t work. Rempe became tangled in the fence and emergency workers were called in to free him.

Rempe, who admitted he was “high on flakka” at the time, told authorities he simply wanted to see his friends inside. Looks like he’s going to get his wish, as he is now in police custody. Rempe is charged with aggravated assault on a law enforcement officer, battery on a law enforcement officer, threBe counts of felony criminal mischief, leaving the scene of a crash with property damage and driving under the influence.