Would-be robber gets shot, kicked in the face by intended victims 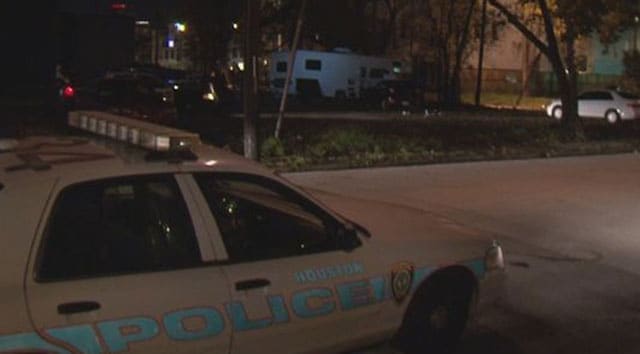 The robbery was believed to be a random crime. (Photo: KHOU)

Two suspects are recovering from multiple gunshot wounds after an attempt to rob two couples in Houston on Sunday night backfired.

The couples were on their way out of a parking lot after a night out when they were confronted by two men holding handguns.

“He said, ‘Hey, give me your money,’” one of the victims, who did not wish to give his name, told KHOU after the incident.

The man explained to the suspect that he did not carry cash and only had a card. As he held up his debit card and ID and told the would-be robber that was all he had, the suspect slapped the cards out of his hand. It was then that the brother of the victim got out of his car and shot the suspect twice in the chest. The suspect then fell to the ground and the victim ran over and – not knowing if he was still alive – kicked him in the face.

The victim then tried to clear the suspect’s gun, only to realize that it was fake. According to Jeremy Spurlock, an investigator with the Houston Police Department, it was an Airsoft gun with the orange tip removed.

“If you’d have seen it, you would have believed it was a real gun,” Spurlock said.

Nonetheless, after shooting the first suspect, the brother unloaded his magazine on the second suspect, who promptly fled with a third suspect who had been waiting in a vehicle nearby.

The injured suspect, who was left behind by his accomplices, was transported to an area hospital where he underwent surgery and was last listed in critical condition. Some time after the attempted robbery, the second suspect showed up at the hospital. He had been shot seven times. His condition is not known.

No charges have been filed against the man who shot the suspects.