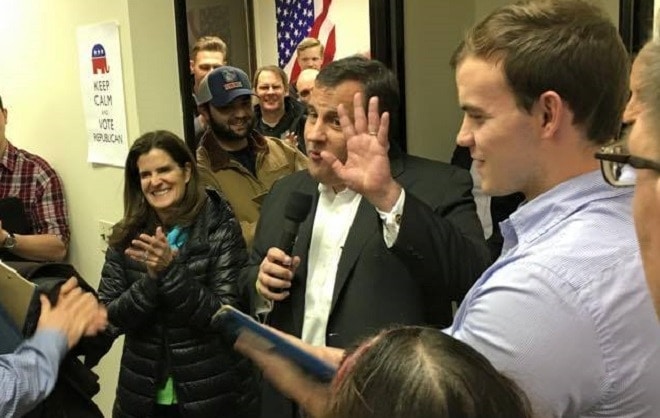 Gov. Chris Christie’s record on never having a veto of his overturned by the New Jersey legislature remains intact as he continues to hang in as a 2016 Presidential candidate. (Photo: GovChristie Facebook)

The bipartisan legislation, a senate bill to add red tape those seeking to clear certain mental health records for the restoration of gun rights and one from the Assembly to increase mandatory surrenders of guns after domestic violence allegations, were both rejected by the Republican governor earlier this year.

In both cases, only four GOP members crossed the aisle Thursday and voted with Assembly democrats, leaving the efforts three votes shy of the 54 needed to succeed.

“I’m not discouraged or disappointed for us, I’m discouraged and disappointed for the people of New Jersey,” said Assembly Majority Leader Louis Greenwald, D-Camden. “I will be, and I think everyone in this house will be, devastated if a tragedy happens in New Jersey like happened out in California. And what we’ve learned is it can happen anywhere. They happen every day now.”

The rejected domestic violence bill, A4218, went after the guns of those who have a protective order against them by requiring the surrender or sale of the accused attacker’s firearms within 48 hours. Although the legislation allowed for gun dealers to hold the weapons until the order was rescinded or the case resolved, the dealer was only given 10 days to pick up the guns from police. Should the gun owner not surrender their firearms, they would be subject to arrest.

The legislation was strongly supported by gun control groups to include the Coalition to Stop Gun Violence and former U.S. Rep. Gabby Giffords’ Americans for Responsible Solutions, who contended the bill was a commonsense measure to help limit domestic abusers’ access to guns.

Assemblywoman Gabriela M. Mosquer, D-Gloucester, in an emotional message, called the failure to push the legislation through “disgusting” and bemoaned the lack of progress on domestic violence issues.

“This is politics,” said Assemblywoman Nancy Muñoz, R-Union. “There’s nothing in the bill that does anything to protect the victims of domestic violence.”

The mental health bill in question, S 2360, would have required individuals looking to erase old mental records so they could legally purchase firearms first advise the Attorney General’s office, local county prosecutor, and state and local law enforcement of their efforts.

Currently, law enforcement is not involved in the expungement process.

Leading up to Thursday’s override failure, S 2360 ran the gauntlet of the state senate and only narrowly escaped the dustbin. The first veto override attempt tanked in September and a second only succeed by the minimum vote in October after Senate President Stephen Sweeney took the drastic measure of threatening to send the state police out searching for unaccounted lawmakers to have a full chamber on hand.

Nevertheless, the Assembly has now voted to sustain the veto on the bill twice, with a similar attempt earlier this month producing the same results.

Assembly Democrats are promising to bring the overrides up for another vote next month.