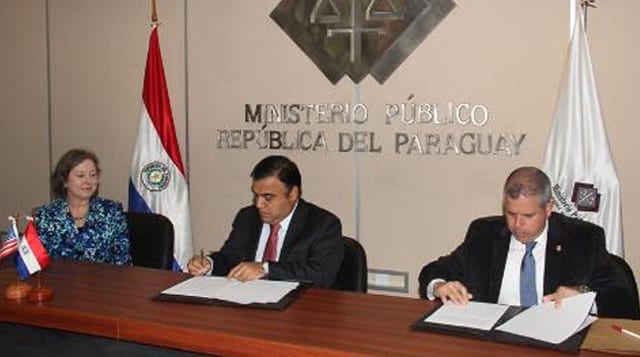 Paraguayan Public Ministry in the capital city of Asuncion on Dec. 17 signing the eTrace Memorandum of Understanding. (Photo: ATF)

The Paraguayan Public Ministry signed an eTrace Memorandum of Understanding, making it the 43rd country to use the system, the ATF announced on Dec. 17.

The purpose of the memo, according to an  example posted by the State Department, is to allow a foreign country to adopt ATF eTrace policies and procedures within its law enforcement agencies.

The memo also allows the country’s officials to designate a point of contact for the country and the ATF and establish clear communication for the service.

According to the ATF, the eTrace system allows law enforcement agencies, both domestic and international, to submit trace requests through the Internet to the ATF’s National Tracing Center, watch the progress of the request, and retrieve them.

The purpose of the NTC is to trace crime guns recovered by law enforcement back to where they originated.

To date, more than 5,600 U.S. law enforcement agencies and 41 foreign countries actively use eTrace in their investigative work, the ATF says. The NTC processed more than 360,000 trace requests in fiscal year 2014.