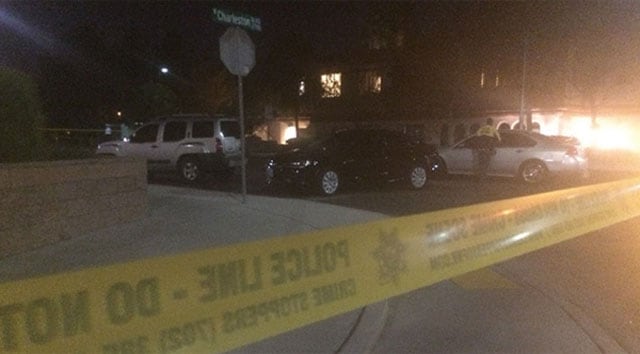 Authorities believe the doctor’s office may have been targeted not only for cash, but prescription drugs. (Photo: 8 News Now)

A female was shot and killed while committing a robbery with a male partner at a doctor’s office in Las Vegas last week.

The two suspects had their faces covered and Lt. Dan McGrath with the Metropolitan Police Department confirmed in a statement dated Dec. 16 the male suspect was armed with a handgun.

The duo entered the office around 7 p.m. and began to ransack the building. Present at the time were the doctor, an employee and a patient who was in the middle of an appointment.

Soon thereafter, the suspects held the employee and the patient in a room, while they pistol whipped the doctor. But the employee was able to get free and ran to the parking lot to retrieve a gun from his vehicle.

As the employee started back towards the office – gun in hand – the suspects were attempting to leave. But as they walked down the steps outside in front of the office, the employee fired several shots, striking the female suspect multiple times. The woman fell to the ground, as the male suspect fled on foot, leaving his wounded accomplice behind.

When police responded the 911 call, they found the female suspect lying on the ground, suffering from a gunshot wound to the chest. She was transported to the hospital, where she died and was later identified as 45-year-old Veronica N. Clay.

The doctor was also taken to the hospital to receive treatment for non-life threatening injuries he sustained to his face during the robbery. The armed employee was not reported to be injured, and neither have been publicly identified.

Police are still searching for the second suspect, who is described as a thin black male, about 5-feet-8-inches tall, last seen wearing dark clothing and a ski mask covering his face.

Authorities believe the couple were after cash and prescriptions.