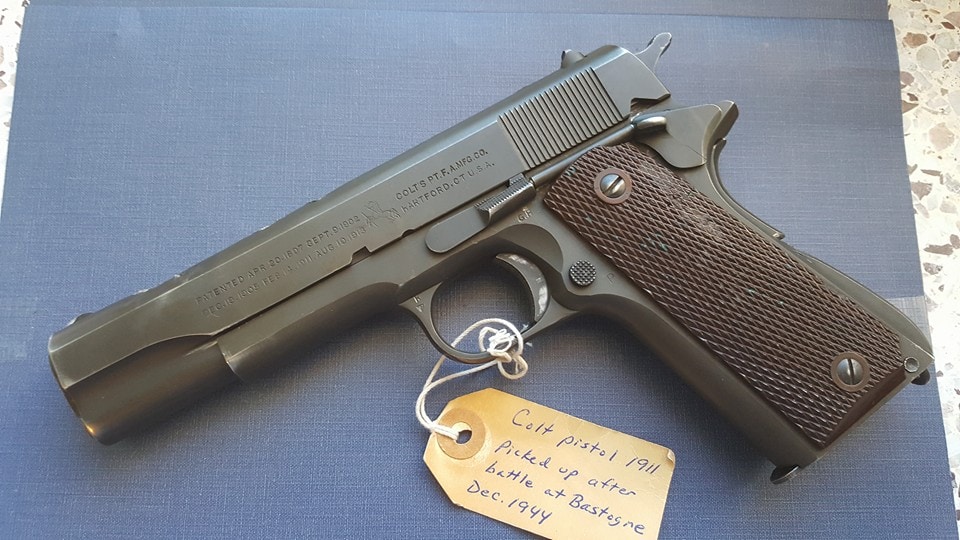 Although the handgun may look no worse for ware from some angles, the unfortunate soldier who carried it likely came out less lucky

“Today I held hell in my hands,” said a firearms buff who came across a battered 1911, pockmarked from its wartime service before it was recovered from a World War II battlefield.

Some 71 years ago this week, Hitler launched the last great German offensive through the densely forested Ardennes region near the intersection of the eastern borders of  Belgium, France, and Luxembourg.

Codenamed “Operation Watch on the Rhine” over 200,000 Germans, including some of the most crack units remaining in the Army at the time, fell upon just 80,000 American troops, including many units such as the 101st Airborne, who were under strength following heavy losses and looking forward to some time in a “quiet area” to regroup. 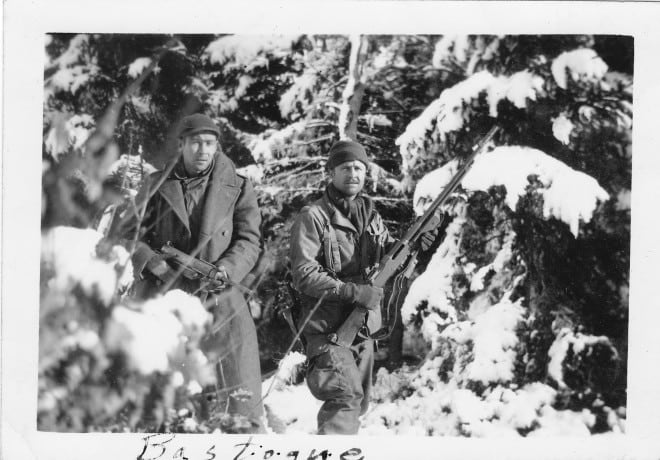 Alvin Quimby (left) on the M3, and SGT Duane T. Tedrick (right) with a BAR. The men were part of “D” Company, 2/506th Parachute Regiment. The picture was taken South of Recogne, in late December, 1944. Tedrick was 22 at the time. It was men like these who fought the Battle of the Bulge, tree by tree. Caption by Kenneth Davis, Mr. Tedrick’s grandson.

However, for the men trapped inside the “bulged” salient from St. Vith to the week-long Siege of Bastogne, it was a white hell of exploding trees and German panzers that those who survived never forgot.

The pistol examined by Daniel ED MacMurray IV, marked with a yellowed tag that reads, “Colt pistol picked up after battle at Bastonge Dec. 1944,” is battered with shrapnel wounds across the top of the slide, muzzle and grip including several that penetrated deep into the steel.

In places, bits of the GI leather holster that held the gun are seen still embedded in the slide. 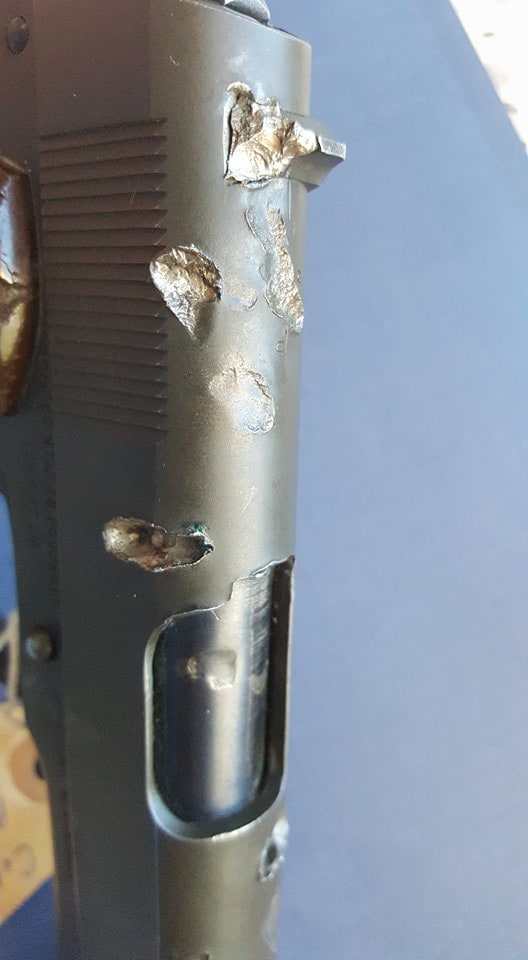 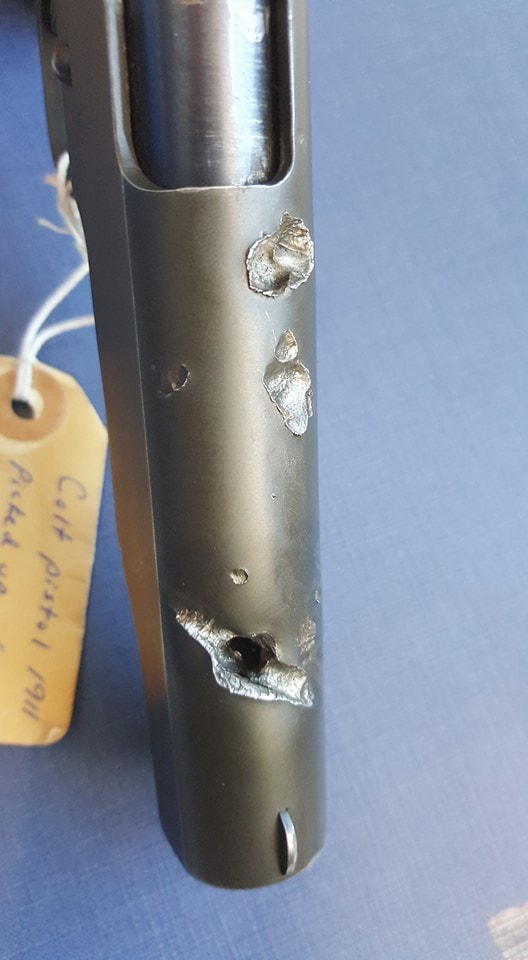 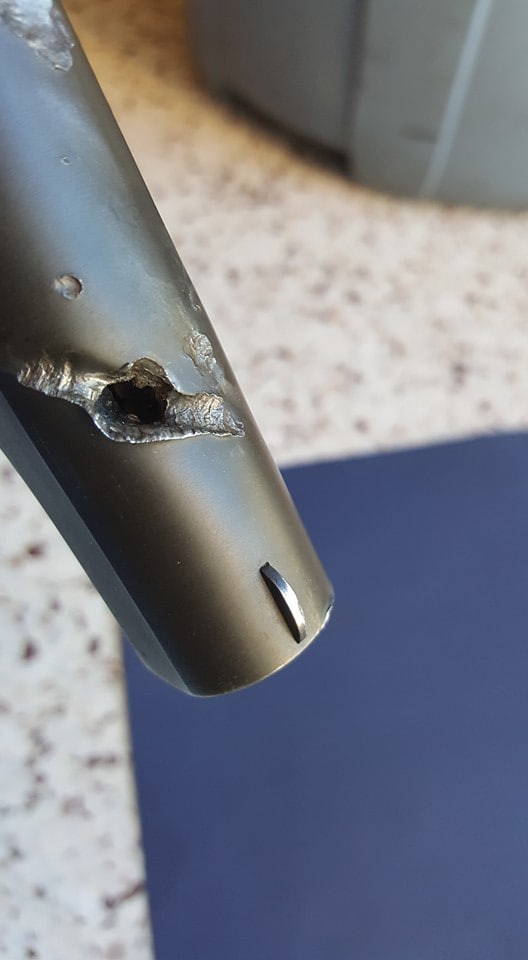 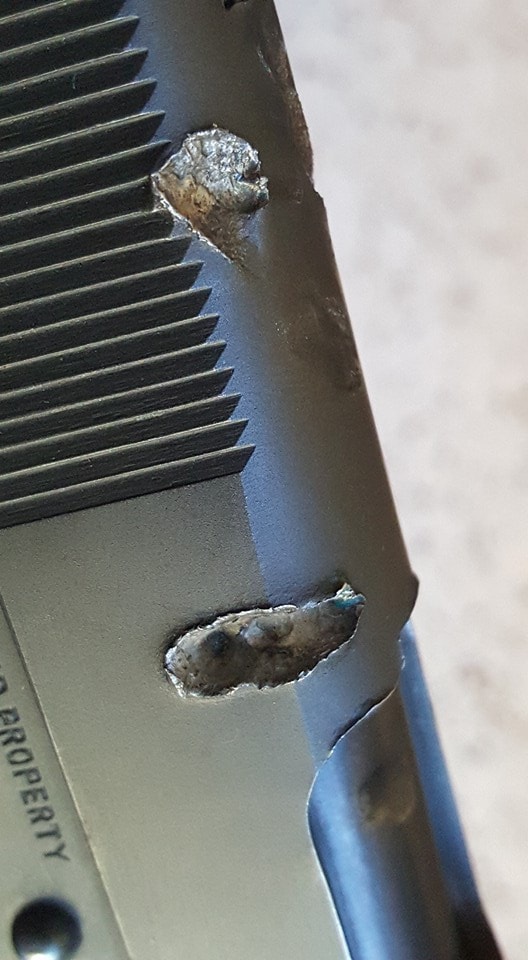 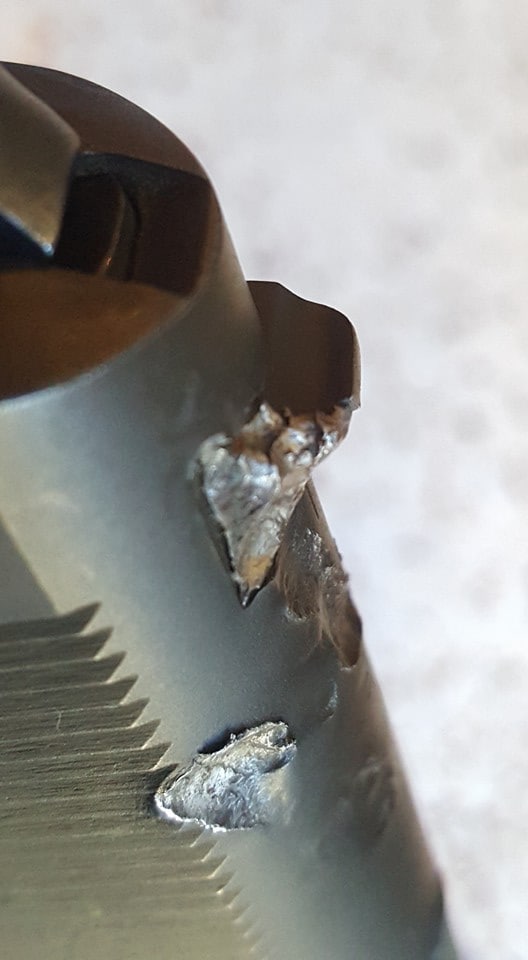 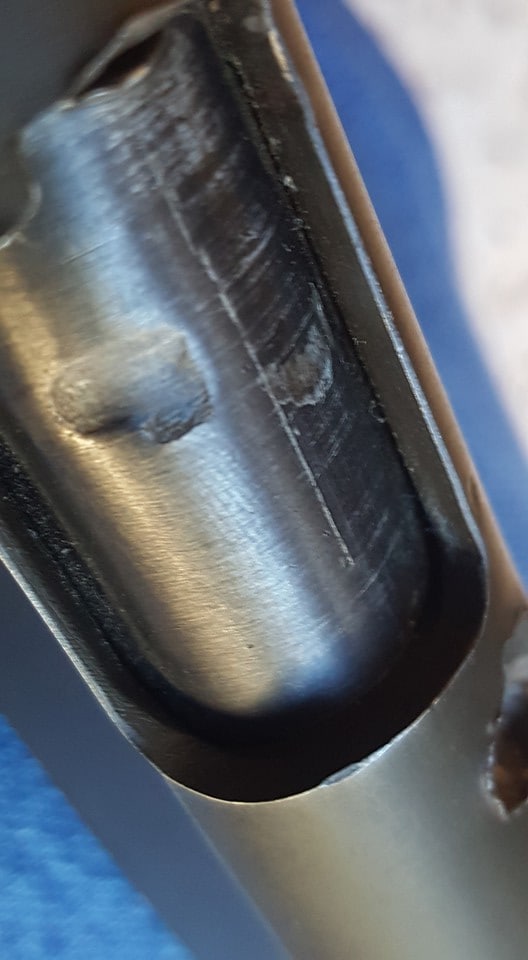 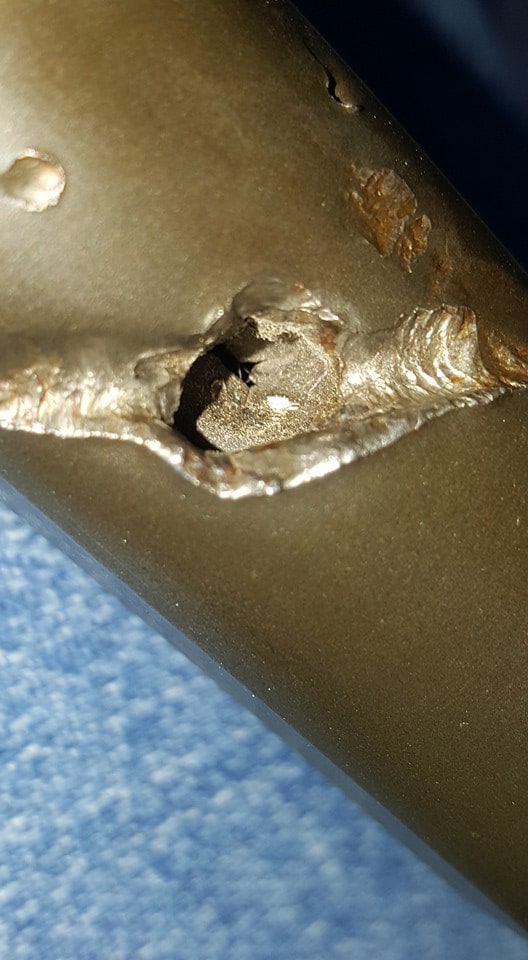 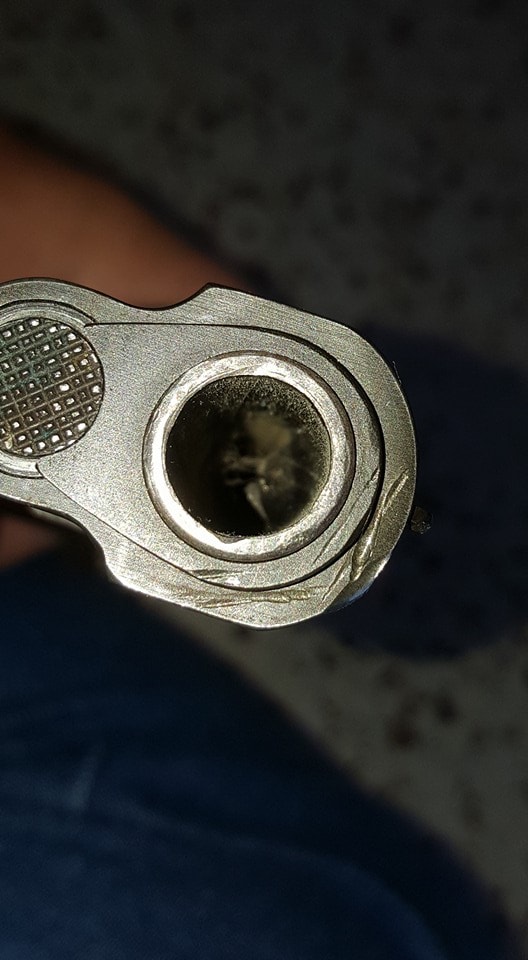 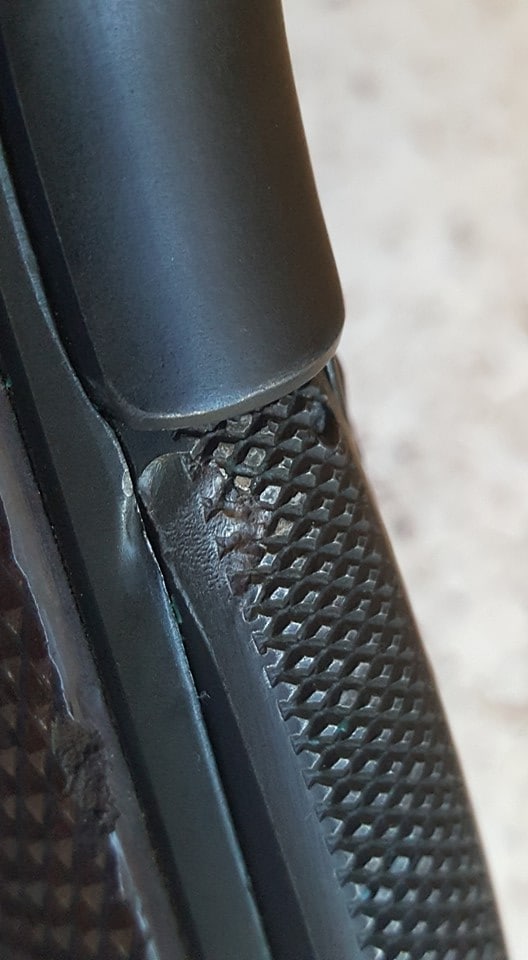 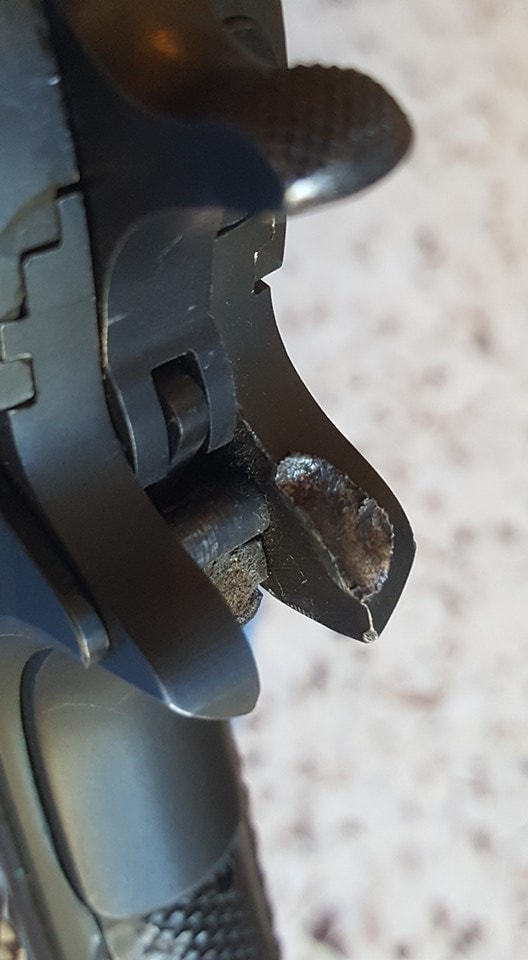 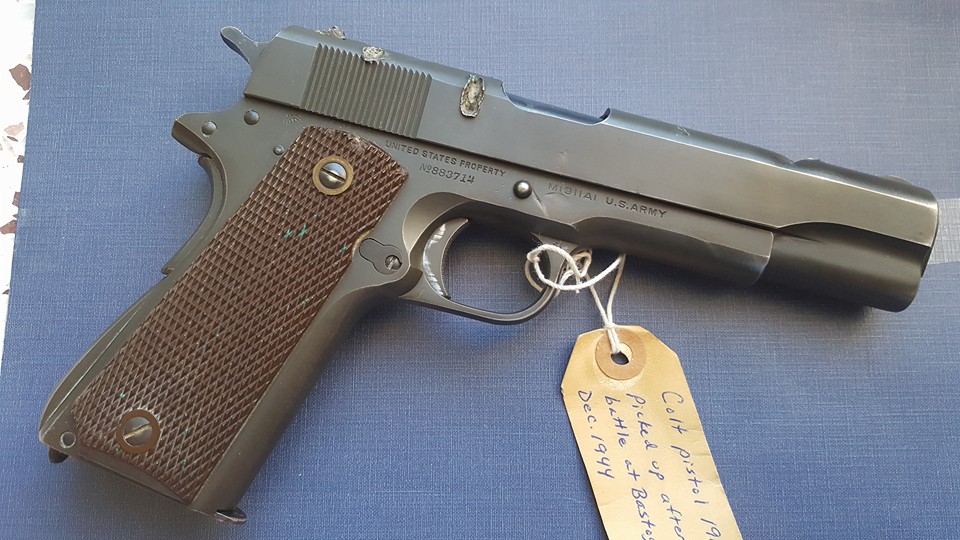 Complete with U.S. Government and U.S. Army markings as well as a rampant Colt on the slide, the M1911A1 GI is serial number 883714, which Colt lists as belonging to a 1943-made gun, meaning the .45ACP likely had only a year or so service on it before that fateful day in the Ardennes.

I hope the hero who died with this at his side went quickly.

This is so representative of what the heroes of WWII went through…. . Not only in the Pacific theatre, but the German front also.

It’s in a friends private collection and it took some doing to be able to photograph it.

I was shaking when I handed it back.

“I took these photos today.. A gentleman I know was kind enough to allow me that privilege.

Often times we get so caught up in the gun we forget the sacrifices.

This one really brings it home.

It is believed that the this damage is from artillery fire.

This weapon was very likely holstered at the time, and the soldier was facing the explosion.

I shared this in a few historical groups I belong to, so some of you have already seen this, but it’s just too powerful of an artifact not to share with the rest of you.

Today I held hell in my hands.

In all, the U.S. Army suffered more than 89,500 casualties in the six weeks of the Battle of the Bulge, making it one of the largest and bloodiest battles fought by the nation’s servicemen.