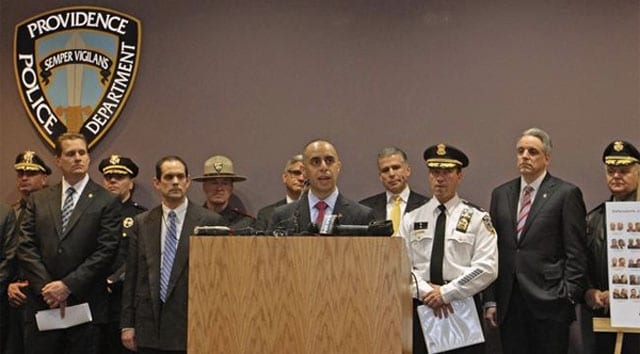 Officials in Providence hold a press conference after 35 people were arrested in February on charges stemming from drug and gun trafficking. (Photo: Steve Szydlowski / The Providence Journal)

The U.S. District Court in Providence, Rhode Island, sentenced two men to serve several years in a federal prison for the part they played in an illegal gun trafficking operation, the Federal Bureau of Investigation announced in a press release Friday.

Kinmonte Markell Brown, 28, and Dennis Wells, 24, of Greenville, North Carolina, are accused of trafficking more than a dozen firearms out of North Carolina into Providence from November 2014 to January 2015. Brown and Wells were arrested in February along with more than 30 other suspects following an extensive and long-standing investigation into drug dealing and gun trafficking. The investigation was a collaborative effort of local, state and federal law enforcement agencies, along with federal and state prosecutors whose common goal was to target violent crime and criminals in Rhode Island’s urban neighborhoods. Namely, the investigation went after the distribution of heroin and crack cocaine and gun running.

“This is like nothing that I have ever seen before,” U.S. attorney for Rhode Island Peter F. Neronha said in February, referring to the size, scope and collaboration of the law enforcement agencies involved in the investigation, which started with about 50 names of criminals who were considered “the worst guys in Providence.”

During the investigation, undercover agents with the Drug Enforcement Administration purchased from Brown and Wells a total of 15 firearms on multiple occasions through a series of negotiations for shipment and purchase out of North Carolina. Among the guns purchased were a .357 magnum revolver with the serial number destroyed and a .38 caliber handgun, as well as numerous shotguns and rifles.

Last week, Brown was sentenced to 84 months in federal prison, while Wells was sentenced to 78 months. Additionally, upon their release from prison, both men are required to serve three years of supervised parole.