The spirit of the journalism

A recent article on Guns.com has drawn the irate attention of commenters on the Facebook page.  A news story, reporting on the efforts of some families in Dallas to give gifts to refugees from the Middle East and Afghanistan drew comments ranging from suggestions to help homeless veterans instead to attacks on Muslims for not being Christian and therefore not really being participants in the giving of gifts at this time of the year.  But one comment accused the magazine of treason for promoting fraternization with the enemy.  In case we missed his point, he identified the enemy as Muslims, advising us that since we’re at war, we ought to act accordingly. 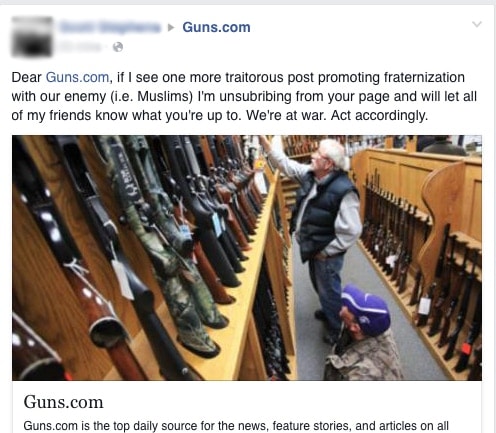 There is so much in that comment that needs addressed.  I am no stranger to annoying our readers, as the comments to my article on the language choices of Lt. Col. Peters illustrates, but what I have to say here is not mere pique.  Nearly two decades of teaching in both high school and college and years of writing for publication (and rejection letters) have given me a thick skin.  What concerns me are the multiple confusions that are to be found in the comment.

First of all is the misunderstanding about the functions of journalism.  Note that the article in question, “Dallas families share spirit of Christmas with Syrian refugees,” does not promote anything—other than information.  The author, Jennifer Cruz, is acting here as a reporter, informing readers of what is going on in a particular region of the country.  Calling that the promotion of fraternization is a demand for censorship.  But as with most forms of interference in the exercise of our rights, censoring in that way would be self-defeating, since it would prevent people from being aware of the events that they deplore.  If you wish to be against something, you have first to know that it exists.

Perhaps our commenter wants all articles on subjects he opposes to take an editorial tone.  Certainly, Guns.com has a variety of articles—some news, some product evaluations, and some opinion pieces.  As the Society of Professional Journalists states in their Code of Ethics, we are obliged to “label advocacy and commentary.”  In that spirit, readers will see that my articles have “Opinion” next to the byline.  The dividing line between reporting and editorials has to be clear if we are to maintain the trust of our readers.  Facts, honestly gathered and reported, are the essential clay out of which we can form opinions.  If reporting gets absorbed into advocacy, on what can we then base our positions?  We would be engaged in the fallacy of begging the question or circular reasoning, the fallacy of asserting what we believe is true because it’s true.

But two more large problems are to be found in the aforementioned comment.  We are indeed at war, but must we accept the words attributed to Cicero that in times of war, the laws fall silent?  By law, here, I mean more than just the specific legislation of our country.  I’m including the rules of morality and human decency that also disappear when the battle is joined.  One such standard is the recognition that war must be against people who are in fact combatants.  We understand that even when a war is just, innocents will die, but it’s our duty to avoid such deaths as much as possible.  And we also have to remind ourselves that one person or group identifying as members of a religion or ideology does not make all members equally guilty.

To be clear, are all Muslims our enemies?  No.  There are more than one billion Muslims in this world, and the vast majority of them are just like anyone else, working to earn their daily bread and get through to the next day.  Just as the Oklahoma City bomber did not represent Christians or whites or—note this well—gun owners, the San Bernardino shooters are not definitive of all Muslims.

We gun owners who care about our rights are treated the same way that some in this country want to treat adherents to the faith of Islam.  Every time a shooting enters the headlines, we are blamed.  We are accused of being complicit for not giving up our rights.  We are labeled terrorists.  And if we want to defeat the assault on our rights, we would be fools to do to other groups what we complain about being done to us.  The Golden Rule is the essence of morality in many traditions.  When I say that I have the right to do as I wish so long as I do not harm innocents, I’m basing my claim on that rule.  I defeat myself if I try to assert a claim to “rules for thee, but not for me” that advocates of gun control so often demand.

As with the Golden Rule, this time of year is also a time of giving among many cultures.  The people in Dallas who are sharing with refugees are not engaged in political advocacy, nor are they fraternizing with the enemy.  They are in fact helping out their fellow human beings, people who are here in this country out of desperation—in some cases, as a consequence of our foreign policy, however justified we were in those actions.  If some among us wish to claim to be Christian, and if all of us wish to claim to be citizens of a nation that brings good into this world, we have no business sneering at or complaining about our fellow citizens who choose to be generous.

Distaste with an article in this particular magazine isn’t such a big deal.  We can take it.  But attacks on the job of journalists or on acts of decency do matter.  We have to be better than that, or we lose any claim to deserving respect for ourselves and our rights.