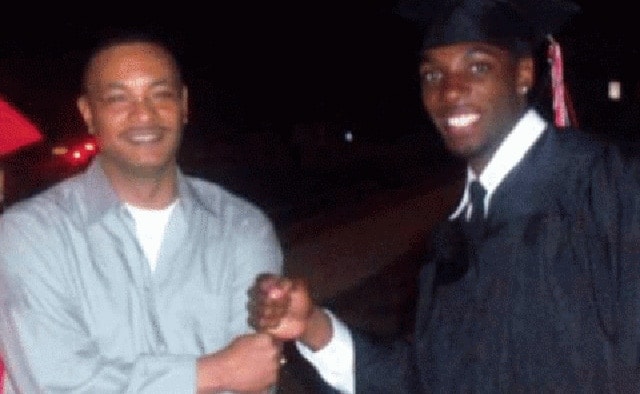 Bobby Daniels, left, and his son Bias Daniels. Their family said Bobby, a security guard at CNN, rushed home from work to help de-escalate the situation.

Georgia police shot a man they say pointed a gun at them, but his family is saying he was trying to prevent a situation that would get his mentally-ill son killed.

Bobby Daniels was shot and killed after a struggle with his son, Bias Daniels, for a handgun, said the Georgia Bureau of Investigation, which investigates police-involved shootings, in a statement released Dec. 22.

However, the GBI said officers opened fire after Bobby pointed a gun at them — something his family says is untrue.

According to GBI’s statement, Douglas County Sheriff’s deputies responded to a 911 call described as a “kidnapping” on Dec. 21 at a mobile home park around 8:20 p.m.

The caller, a security guard at the mobile home park, told deputies he had been held at gunpoint by a man while making his rounds. Then a Daniels family member approached and told deputies the whereabouts of a man with a gun — Bias — located just the next street over.

At this point in the story, there are conflicting accounts about what happened.

The GBI said deputies approached a dark SUV and white sedan on the road, and in front of the SUV was an armed man, 25-year-old Bias. Deputies instructed Bias to put down the gun but as he did another man, his father, 48-year-old Bobby, got out of the sedan and grabbed the gun.

As both men struggled for the gun, one of the deputies fired his Taser, but it failed to subdue either men. As the fight continued, the handgun was pointed at the deputies and in response the deputies opened fire, killing Bobby.

The gun hit the ground, but Bias picked it up and ran away. Deputies pursued him and fired one shot, but missed him. He was arrested a short time later and charged with aggravated assault, kidnapping and obstruction.

On the other hand, the Daniels family told reporters during a news conference Wednesday that the authorities were late and did not understand the situation.

Bobby, a security guard at CNN’s headquarters in Atlanta, was at work and rushed over to help calm his son down when he learned Bias was having a mental and emotional breakdown, the family said.

But when Bobby arrived, Bias pointed the gun at him and forced him back into his car. However, Bobby continued to talk to his son and eventually convinced him to set the gun down on the hood of the car. That’s when the deputies arrived.

The family, many of which witnessed the incident, said deputies tried to use the Taser on Bias, but his jacket was too thick for it to be effective. He then stepped toward the gun, so Bobby jumped out of the car and tried to get the gun away from Bias.

The family described his gesture as trying to “slap” the gun off the car and accuses the authorities of fabricating their account in order to justify the shooting.

“My husband would never ever take a gun and point it at an officer,” Cynthia Daniels, the slain man’s wife, told reporters. “He would never do that.”

The family said Bobby was a Navy veteran, father of five, and an avid defender of law enforcement. They added he was trying to protect his son and the officers.

The Daniels family plans to file a lawsuit against the sheriff’s department.