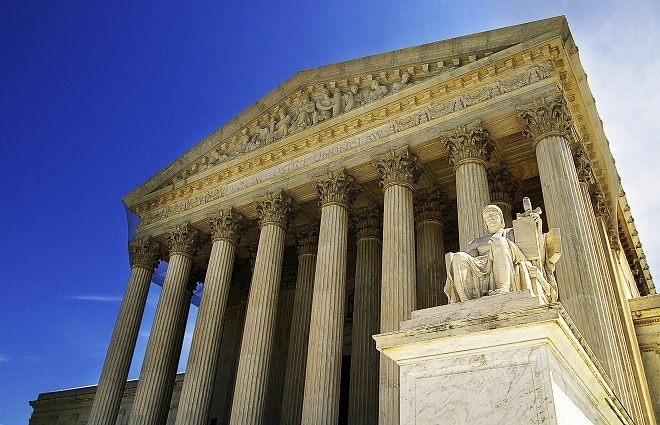 It was a seesaw struggle for Second Amendment litigation at both the state and federal level in 2015, with important gains for privacy and carry rights but losses when it comes to weapons bans.

The mixed bag of lawsuits decided this year in some ways reinforced splits in lower court decisions and repeatedly saw the nation’s highest court sit on its hands when it came to deciding these cases. There were important decisions made that effect the right to carry firearms outside the home, local restrictions on what guns individuals have a right to own, how guns should be safely stored and how much health care workers can pry into their patient’s firearm ownership, liability issues and whether a city can place special taxes on gun and ammo sales.

In May, U.S. District Judge Frederick J. Scullin Jr. issued an injunction barring Washington D.C. from applying its vague “good cause” test as part of its controversial may-issue permitting scheme that has declined more concealed carry permits than it has granted. The order came as a part of the Wrenn v. D.C. case backed by the Second Amendment Foundation as a follow up to its important 2014 win in Palmer v. D.C., which brought lawful concealed carry to the District.

However, the Wrenn victory was put on ice when an appeals court in December found that Scullin did not have jurisdiction to rule in the case and vacated his decision, sending it back for another hearing with a different judge.

In June, a rare 11-judge en banc review panel of the U.S. Ninth Circuit Court of Appeals in California reheard arguments in the combined Peruta and Richards cases which challenged restrictive “may-issue” concealed carry policies by the sheriffs of San Diego and Yolo counties, respectively. The stakes in the case are high, as if the court finds for Peruta and the other claimants in the case; it could unleash an avalanche of new concealed carry permits in the Golden State. Any decision, expected in the first part of 2016, would likely carry on to a Supreme Court appeal.

Elsewhere, the Alabama Supreme Court struck down local controls on open carry in a case that had its roots in a 2011 case of a man who carried inside a bank and was arrested the next day for doing so under a municipal law.

In March, a three-judge panel of the Ninth Circuit upheld the city of Sunnyvale, California’s ban on magazines holding more than 10 rounds. Although the court agreed that the law, which banned even grandfathered magazines in the city, “restricts the ability of law-abiding citizens to possess large-capacity magazines within their homes for the purpose of self-defense,” they noted that it did not have a severe effect on the Second Amendment.

Citing the Sunnyvale example, Los Angeles and Oakland have since moved to establish local confiscatory bans on grandfathered magazines, which in the case of the City of Angels has led to another court fight that will continue into next year.

In December, the Supreme Court declined to define the types of firearms that can be banned under local, state and federal law, turning away a Second Amendment challenge to the assault weapons ban established by Highland Park, Illinois. In a 7-2 vote, with justices Clarence Thomas and Antonin Scalia dissenting, the decision upheld the city’s prohibition on semiautomatic weapons with a capacity of 10 or more rounds.

In June, the U.S. Supreme Court declined a motion to hear an appeal in a case challenging San Francisco’s controversial 2007 gun lock law, in effect allowing an appeals court ruling to stand. In doing so, the nation’s highest court swatted away the chance to let lower courts know it meant what it said in its 2008 Heller decision over gun rights issues by taking the case of Jackson v. City of San Francisco. That case was unanimously rejected by a three-judge panel of the Ninth Circuit last March who upheld a district court’s ruling that the city’s mandatory gun lock law was valid.

In other California gun control cases, a federal judge in February stood behind the state’s handgun roster system for semi-auto pistols although the mandates required by the state have seen the list of approved guns dwindle due to microstamping requirements. “It is difficult to understand how the Supreme Court’s landmark District of Columbia v. Heller decision could be so badly mis-applied,” Brandon Combs, executive director of the Calguns Foundation in a told Guns.com in the case, which is under appeal to the Ninth.

Further, in another case a federal judge in March found that the dealer’s record of sale fees collected by the state of California, which fund a program to confiscate guns, are constitutional, “…because it places only a marginal burden on ‘the core of the Second Amendment.’”

Winding its way through the courts since 2011, a three-judge panel of the U.S. Court of Appeals for the Eleventh Circuit upheld Florida’s controversial Firearms Owner Privacy Act prohibiting health care workers from asking about their patient’s firearms. Challenged by a myriad of medical lobby groups joined by the Brady Campaign in the case of Wollschlaeger v. Governor of the State of Florida, better known as Docs v. Glocks, the court handed Gov. Rick Scott his third consecutive win over the health care lobby in December.

In October, a jury in a Wisconsin Circuit Court decided in favor of two Milwaukee police officers to the tune of $6 million in a suit against a gun store for negligently selling a pistol to a straw buyer. The case stemmed from a 2009 sale by Badger Guns in Milwaukee in which the plaintiffs argued shop employees on duty looked past a number of red flags in the sale of a Taurus PT140 .40-caliber handgun that wound up in the hands of Julius Burton, 18, who used the pistol a month later in the shooting of then-officers Bryan Norberg and Graham Kunisch.

Backed by the Brady Campaign, the gun control group promised the judgement would herald a new era in lawsuits against gun stores and firearms companies despite legal protections under federal law provided by the Protection of Lawful Commerce in Arms Act, which shields gun makers from lawsuits if a consumer uses their products with malice toward another person.

The same month, a federal judge handed a suit against Bushmaster Firearms back to a Connecticut court where family members of Sandy Hook victims will have a better chance of winning by arguing their case under a state law called the Connecticut Unfair Trade Practices Act. They contend Bushmaster acted negligently by advertising military-style weapons to civilians which led to in part to the Newtown shooting.

However, the Brady group bit off more than it could chew when they took online ammo retailer Lucky Gunner to court contending they and others failed to properly vet James Holmes before they sold him items he would later use to kill 12 and wound 70 inside a movie theater in Aurora, Colorado. Along with Brady, parents of one of a victim killed in the shooting also signed on as plaintiffs. A federal judge not only found for Lucky Gunner and awarded $203,000 in fees to the retailers the organization sued, but chastised them as well.

Last week a county judge in Seattle dismissed a strong case mounted by a dream team of Second Amendment and gun lobby groups challenging the city’s new gun and ammo tax on preemption grounds. Because of the ruling, the city’s $25-per-firearm tax on firearm sales goes becomes law at New Year’s Day 2016, and the NRA and a host of other plaintiffs, notably the Washington-based Second Amendment Foundation, must pay taxable costs and attorney fees. The groups are planning an appeal.

As a result of the Seattle law, Los Angeles and Cook County, Illinois are considering adding taxes to of their own in coming weeks.

Overall, 2016 already looks to be an interesting year for gun rights litigation.