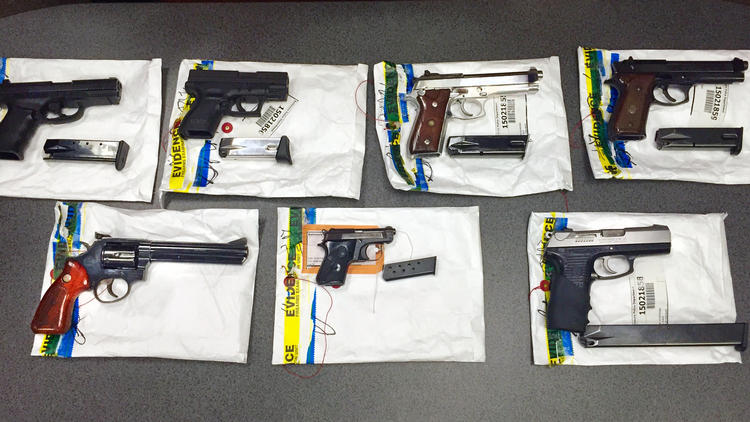 The Baltimore Police Department found these guns during a recent raid on the Safe Streets offices on E. Monument Street in July. (Photo: The Baltimore Sun)

Federal authorities last week announced the results of a 7-month-long investigation, which led to the arrest of seven individuals accused of trafficking guns from Tennessee into Maryland. The bust, which included an unregistered, fully-automatic machine gun, highlights the problem Maryland is having in its attempts to stop the flow of illegal guns past its borders and into cities like Baltimore with strict gun control measures.

The Bureau of Alcohol, Tobacco, Firearms and Explosives traced some 5,079 firearms recovered in Maryland in 2014 and found just less than half, or 2,208, came from other states, the Baltimore Sun reported.

The biggest provider of illegal guns to Maryland cities was Pennsylvania with 309 and Virginia with 533. Tennessee only provided 39 illegal guns that year, according to the federal agency, which would suggest last week’s arrests had little impact on the Maryland gun trade, but officials played up their efforts nonetheless.

“A supply chain that brought illegal guns to Baltimore City from Tennessee has been put out of business, and suspects who tried to smuggle weapons into Baltimore are now in federal custody,” said U.S. Attorney Rod J. Rosenstein in a statement.

The investigation, which was a cooperative effort between various state, federal and local law enforcement agencies, began back in May following the arrest of an undocumented immigrant who was attempting to illegally sell eight guns in Baltimore City. Soon thereafter, authorities discovered a second suspect who was purchasing guns in Tennessee for illegal resale in Baltimore. He was arrested in July while in possession of 21 guns. Following the second arrest, investigators gathered the names of other individuals who intended to make illegal gun purchases through the same pipeline.

The investigation led to the arrest of seven individuals, including three convicted felons. Five were placed in police custody, while two remain on house arrest. All are facing federal gun charges in a U.S. District Court in Maryland.

Named in the complaint are:

Henson, Ennis and Arciaga are accused of conspiring to purchase an unregistered gun, which was defined by federal law as a “machine gun.” First, Henson arranged the transaction before bringing Ennis and Arciaga aboard, but at the time of the purchase, Ennis handed over the cash, while Arciaga took physical possession of the gun. Kengni is also accused of illegally purchasing a different machine gun.