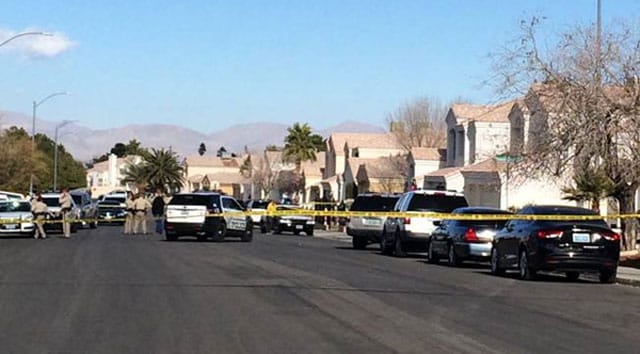 The two suspects were shot and killed on the same day, within about six hours of one another in two unrelated break-ins. (Photo: Kailyn Brown / Las Vegas Sun)

Just before 5 a.m. on Dec. 23, a couple awakened to the sound of someone kicking and banging on their apartment door. According to reports from a local NBC affiliate, the banging continued despite the male resident warning the suspect several times that he was armed with a gun and ready to protect himself.

Likewise, the female resident already placed a call to 911, but before police could arrive, the situation escalated as the suspect attempted to forcefully enter the apartment. Eventually, when the suspect failed to heed the resident’s warnings, the resident fired six shots, striking the suspect multiple times.

The suspect, who was later identified as 31-year-old Richard Rizal McGee of Huntington Beach, California, died as a result of gunshot wounds to the neck and torso.

Lieutenant Dan McGrath with the Las Vegas Metropolitan Police said it is preferable for home invasion victims to call 911 and wait for the police, but also noted that isn’t always an option and residents have the right to defend themselves.

A few hours later, around 11:15 a.m., a Las Vegas homeowner heard what sounded like glass breaking. He armed himself with a gun and went downstairs to see what was causing the commotion. As he descended the stairs, the homeowner found two suspects had broken into his home, according to reports from the Las Vegas Sun. He fired at the first suspect, causing him to flee from the home through a broken window. But at that point, the second suspect started up the stairs, toward the homeowner, who in turn shot the second suspect.

The homeowner immediately called 911 to report the incident, while a neighbor made a second call to the police after finding one of the suspects in the backyard groaning, presumably in pain from the gunshot wounds he sustained during the break-in.

When authorities arrived, the suspect in the yard was transported to a local hospital, where he was last listed in stable condition. The body of the second suspect was found inside the home. He was pronounced dead at the scene.

Authorities discovered both suspects were 17 years old, while a third 13-year-old suspect, believed to be the lookout during the break-in, was also taken into custody. The 13-year-old was not injured.

The deceased suspect was later identified as Manquise Leshon Adams of Glendale, Arizona. The surviving teen suspect, whose name has not been released, now faces charges for home invasion and burglary.

Charges have not been filed against any of the residents from either home invasion.