Number of cops fatally shot in 2015 down by 14 percent 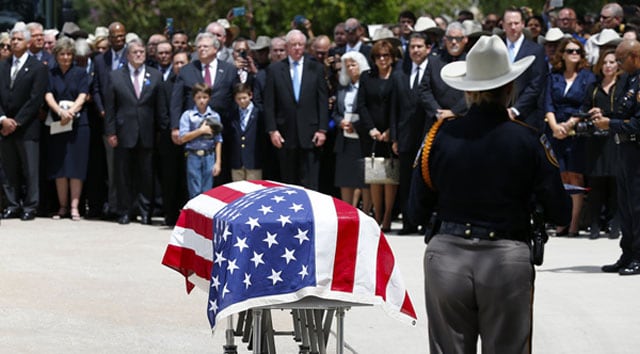 Despite a number of high-profile cases of officers fatally shot in the line of duty this year, the number of such instances was actually less than last year. (Photo: Aaron M. Sprecher / Getty Images)

According to preliminary data released Tuesday by the National Law Enforcement Officers Memorial Fund, the number of law enforcement officers who died in the line of duty rose four percent from last year, while the number of officers fatally shot dropped by 14 percent in 2015 compared with the previous year.

Altogether, there were 124 officers who died in the line of duty in 2015, up from 119 in 2014. The leading cause of in the line of duty deaths remain traffic-related incidents, which include vehicle accidents as well as instances in which officers are struck by vehicles while conducting other duties. Fifty two officers died in traffic-related events, which have continued to be the top cause of on-duty officer deaths for 15 of the past 20 years.

“Move over and slow down when you see an emergency vehicle on the side of the roadway,” said Craig W. Floyd, the group’s chair and chief executive officer, in an interview with National Public Radio, noting that “11 officers this year were struck and killed by motorists who did not slow down, who did not move over.”

Behind traffic-related incidents, gunfire remained the second cause of in the line of duty deaths for officers in 2015, with 42 deaths the result of shootings. Of those 42 deaths, seven occurred following traffic stops, the same number as 2014.

Ambush attacks were the cause of death for another 6 officers, down more than half from the previous year. Disturbance calls resulted in five fatal shootings of police officers, while another five occurred while responding to reports of a suspicious person. Four more officers were fatally shot while attempting to make an arrest, one fewer than in 2014.

According to figures, the number of officers shot and killed in the line of duty peaked in 1973 with 156 officers fatally shot and 280 overall fatalities for the year. Since then, the number has continued to decrease. Still, Floyd would like to see fewer guns in the hands of dangerous criminals.

“This nation of ours is a nation of guns,” Floyd said. “It’s a right that people have and we honor that right. But at the same time, too many criminals are using guns illegally to commit violent acts, not only against the citizenry but also against the law enforcement professionals who have to go out and keep our communities safe.”