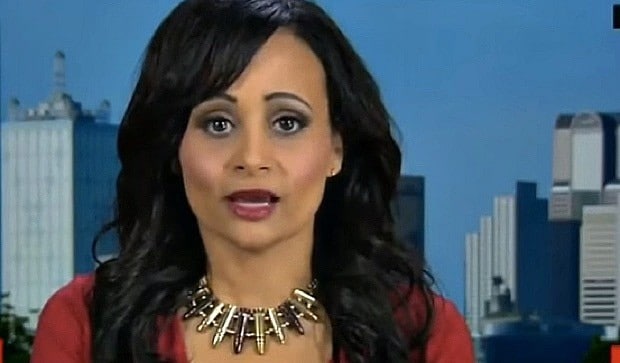 Katrina Pierson, a spokeswoman for the Trump campaign, wearing a bullet necklace during an interview.

Donald Trump has surged in his campaign for Republican presidential candidate by making inflammatory comments and prime click-bate, but interestingly the aesthetics of an interview about his comments became the subject of debate that encouraged more inflammation.

But it wasn’t mention of the 18-year-old sex scandal, Trump saying Hillary got “schlonged” in the 2008 election or describing her bathroom break during a debate as “disgusting,” but Pierson’s bullet necklace that got attention.

In response, Pierson responded: “Maybe I’ll wear a fetus next time& bring awareness to 50 million aborted people that will never ger (sic) to be on Twitter.”

There’s nothing more to this report. Feel however you’d like about it and the presidential candidates.