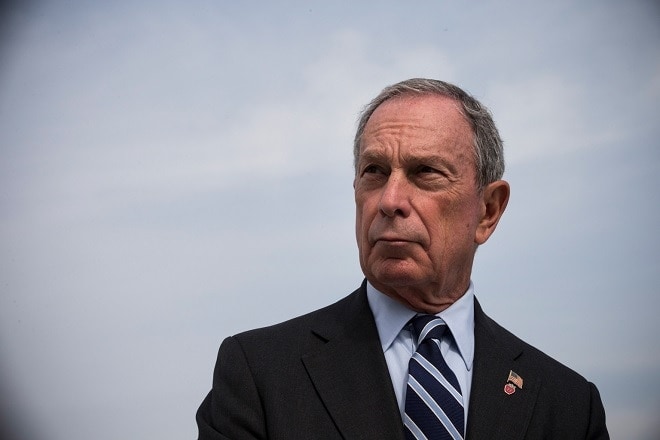 Former New York Mayor Michael Bloomberg played heavy in a number of legislative efforts in 2015’s gun politics, though came out with a mixed return on his investment. (Photo:Andrew Burton/Huffington Post)

Lawmakers from coast to coast in 2015 sought to expand gun rights or implement gun control measures in a number of states, with a measure of success on both sides.

Despite the best efforts of Bloomberg-backed gun safety advocates and state Democrats, the number of states that allow open carry and unlicensed concealed carry both increased while others advanced reforms on federally regulated suppressors. On the downside for gun rights, those same advocates managed to derail several campus carry bills, add another state to the ranks of those that mandate background checks for private gun sales as well as usher in further regulation in states that already have the strictest in the nation.

In Kansas, Republican Gov. Sam Brownback signed a measure in April to allow lawful concealed carry of handguns without a permit.

“Responsible gun ownership, for protection and sport, is a right inherent in our Constitution,” he said at the signing of the popular measure that passed the state legislature in sweeping 31-7 and 85-39 bipartisan votes.

Following in the Sunflower State’s footsteps, Maine’s Republican Gov. Paul LePage set aside earlier veto threats to lend his signature to a proposal making his state the seventh in the country to back constitutional carry.

The club would have gained three other members, West Virginia, Montana and New Hampshire who saw governors, all Democrats, veto permitless carry bills sent to them in recent months by lawmakers. In each of these cases, public safety concerns brought up by gun control and police lobby groups were cited.

However, before the year was out a renewed push is underway to bring West Virginia onboard in 2016.

In 2015, Texas became the only new state to adopt provisions to allow both open carry and the lawful carry of firearms inside formerly gun-free zones. Nevertheless, the campus measure has proven controversial in implementation, which is scheduled for next August.

As noted by the National Conference of State Legislatures, with the change in the Lone Star State and revocation by California of that right, eight states now have provisions allowing the carrying of concealed weapons on public post-secondary campuses.

A number of bills to bring such policies to fruition across the nation in states such as Florida and Arkansas saw significant opposition from campus groups and gun control advocates. In the end, most were defeated.

“This was a big year for us,” said Everytown in a post to social media touting 15 campus carry bills were scratched in 2015. “With your help, we defeated the NRA’s extremist agenda in states across the country, including their push to allow guns in college classrooms and dormitories.”

As with constitutional carry, failed legislation to bring campus carry has been rebooted and is tracking into the new year in Florida and Wisconsin among others.

Despite rhetoric and threats of veto, two Democratic governors, Minnesota‘s Gov. Mark Dayton and Vermont‘s Gov. Peter Shumlin signed laws including language to decriminalizes ownership of federally registered suppressors and repeal some of the oldest bans in the nation on the devices. This brings a total of 41 states onboard with National Firearms Act-regulated suppressors, whose numbers in circulation ballooned to almost 800,000.

Although Dayton cautioned lawmakers that, “I’m not aware that there is any part of the Second Amendment to the U.S. Constitution that gives us the right to bear a silencer,” he nevertheless signed the bill once it passed in a veto-proof 55-9 vote from the Minnesota Senate.

Upping spending to a 15 to 1 ratio against gun rights groups, the Everytown campaign helped back a narrow partisan victory in Oregon where Democrat Gov. Kate Brown signed legislation in May making Oregon the eighth state to adopt the expanded Brady checks for virtually all gun transfers.

This met with tacit resistance from gun stores and some rural sheriffs including Josephine County Sheriff Dave Daniel who said, “The bad people are going to get guns regardless, whether this law makes a difference or not in how they do their gun transfers.”

The gun control lobby was not as successful elsewhere, seeing an effort in Vermont stomped flat in the face of grass roots opposition despite outspending Second Amendment groups there by a factor of five to one.  Likewise, efforts in Virginia and New Jersey have stalled.

Brown also further codified reforms to the state’s new gun violence restraining order law while doubling back on Democrats in the state legislature by vetoing a measure to expand the list of crimes that trigger an automatic 10-year ban on gun possession.

With Republican control of Capitol Hill and a lame duck Democrat in the Oval Office, movement on federal gun legislation was largely stagnant in 2015, with the GOP blocking votes on anti-gun measures yet not having enough votes to veto-proof bills of their own. What did produce modest results for both sides were amendments threaded into “must-pass” spending bills.

In November, President Obama signed the National Defense Authorization Act for Fiscal Year 2016 into law, which, among other pro-gun reforms, will allow the Civilian Marksmanship Program to sell 100,000 surplus Army 1911 pistols to the public. The .45ACP handguns, which have been sitting in storage since being withdrawn in favor of the M9 Beretta in the 1980s, will be doled out at a maximum of 10,000 guns per year.

This month, the President signed the leviathan Consolidated Appropriations Act, which brought a $39 million increase in 2016 to the budget of the Bureau of Alcohol, Tobacco, Firearms and Explosives while including stipulations in the budgets of other agencies that explicitly state none of their funding can be used to promote or advocate gun control.

With an end-run into an election year the ultimate control of the White House on the line, you can expect more of the same for the coming year.