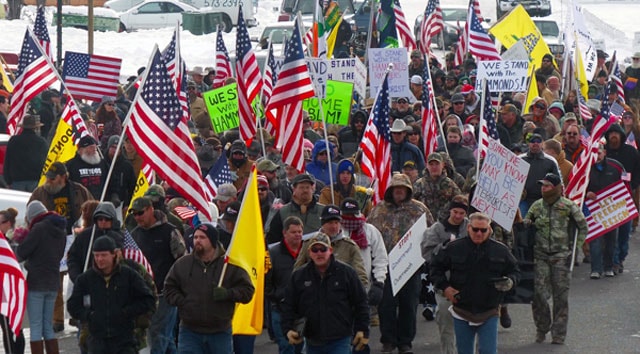 A group of armed protestors concerned about government overreach have occupied a building at a national wildlife refuge outside of Burns, Oregon. The group says they are there to show support for ranchers who they say are being unconstitutionally imprisoned by the federal government.

Citizens settled at the Malheur National Wildlife Refuge headquarters building following a protest and march through the small town Saturday. The remote facility, which is used as a sort of pitstop for hikers and other outdoor enthusiasts, was closed for the holidays over the weekend, and according to Ammon Bundy, a member of the group, they are prepared to stay at the facility for an extended period of time if need be.

Bundy, who is the son of Nevada rancher who was involved in a similar standoff with the Bureau of Land Management over a grazing rights dispute in April 2014, told CNN the protest was an attempt to restore the constitutional rights of the people and to keep the federal government from further encroaching on the land rights of local residents.

Bundy elaborated in a video by saying the group’s goal is for the residents of Harney County to be able to use the area’s public resources freely and without fear. In short, he wants ranchers and area residents to have the opportunity to “claim back their lands and resources.” Bundy also noted that the refuge was purposely chosen for their protest because of the personal destruction it has caused the people of the county.

“They are continuing to expand the refuge at the expense of the ranchers and miners,” Bundy said, referring to the fact that the refuge has expanded to take over more than 100 ranches since the 1900s.

Bundy purports that while Harney County once was one of the wealthiest counties in the state, it is now one of the poorest and blames the expansion of the federal government onto the people’s property. Not only that, Bundy claims that those who attempt to stand up against the government and fight for their property rights are being unfairly punished.

“Now that people such as the Hammonds are taking a stand and not selling their ranches, they are being prosecuted in their own courts as terrorists and putting them in prison for five years,” Bundy said, referring to local ranchers Dwight Hammond Jr. and his son, Steven Hammond, who were convicted of arson in 2012 for a fire they set nearly 15 years ago on BLM land neighboring their own.

The Hammonds served five years in prison for their convictions and, according to Bundy, have paid close to $1 million in legal fees fighting the charges. The Hammonds argue the fire, which burned nearly 130 acres, served two purposes: To rid the area of invasive, harmful plants and to produce a fire break that would help to prevent future wildfires, both practices which are common. Prosecutors, however, claim the Hammonds set the fire to cover up evidence of a poaching operation in which they were involved. The Hammonds deny those claims.

But despite the fact the Hammonds have served their sentences, their legal battles are far from over. In fact, the father and son were due to surrender to authorities Monday for additional prison terms after federal appellate judges determined they were originally illegally sentenced, a move which Bundy and others believe is not only unfair, but unconstitutional.

Meanwhile, the group has occupied the refuge to show their support for the Hammond family, and Maureen Peltier, a Washington Army National Guard staff sergeant who joined the group over the weekend said that, despite some media reports, there was no hostile takeover of the facility. Peltier said, “They are simply occupying land and a building owned by ‘We The People.’” 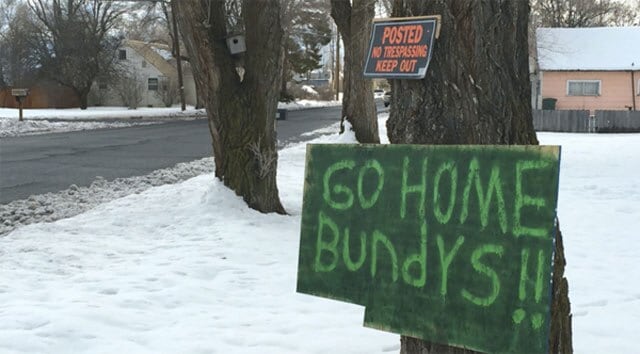 Not all of the local residents are happy to have the concerned citizens in town. (Photo: Washington Post)

Peltier said things have thus far remained peaceful, and while some applaud the group’s actions, others say it’s time for them to leave, with some even suggesting the government initiate use of force to remove the protesters. Some are referring to the group as a militia, some are calling them anti-government, while others, including the Southern Poverty Law Center, are dubbing them terrorists and even brining race into play.

According to the SPLC, which tracks hate groups across the country, the “militia movement” has spiked over the last 20 years, peaking at the middle of the Obama administration in 2012, and shows little signs of letting up. The organization claims militia groups, which include the Oath Keepers, are antigovernment and their views “driven by immigration, the struggling economy and the election of the first African-American president.”

Additionally, the organization claims the ideologies of such groups are fueled by “groundless conspiracy theorizing,” but admits militias do not typically advocate violence or criminal activities and are not generally racist in nature.

Harney County Sheriff David Ward said Sunday that the group’s protest had nothing to do with the Hammonds or any property disputes, but they instead had “alternative motives to attempt to over throw the county and federal government in hopes to spark a movement across the United States.”