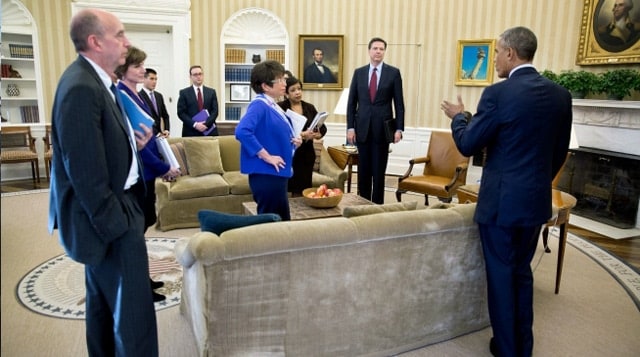 President Obama, left, meet with his Attorney General, head of the FBI, and other key figures in his administration on gun control executive actions on Jan. 4, 2016. (Photo: White House)

According to a statement by the White House, President Obama’s executive action includes a four-point plan that aims to strengthen the background checks system used in the gun buying process and expand the role of the ATF.

The key background check measure includes altering current rules that allow weapons to be transferred through trusts; that dealers that make a living off of selling guns are licensed and conducting background checks; state and federal authorities are more fastidious with criminal records; and expand the background check system with more staff for better availability.

Second, the President plans to expand the role of the Bureau of Alcohol, Tobacco, Firearms and Explosives in an effort to better enforce gun laws. Included in 2017’s budget is funding for 200 new ATF agents and investigators. Also, the establishing of an Internet Investigation Center that will allow the ATF to track illegal online firearms trafficking.

Lastly, the Departments of Defense, Justice, and Homeland Security will conduct or sponsor research into gun safety technology such as smart guns.

Check back to Guns.com for more on this