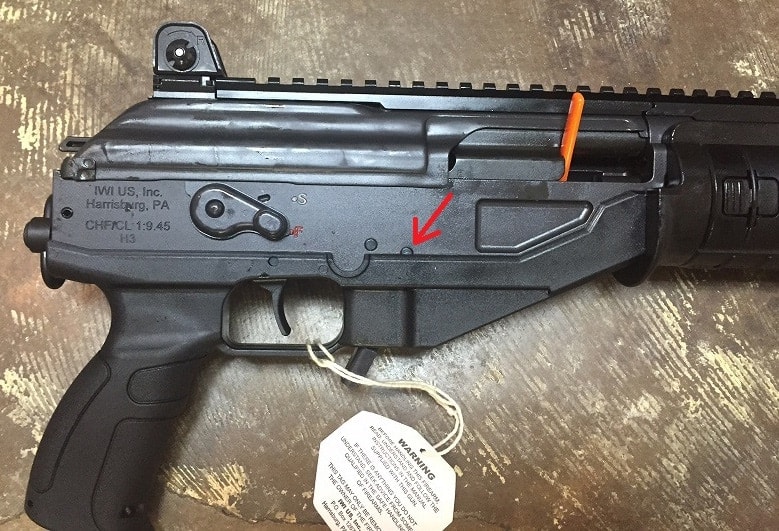 The arrow points at the third hole. (Photo:The Firearm Blog)

IWI US issued a recall for all Galil ACE pistols that have a three-pin (or three-hole) fire control group, which is commonly found on AK-type full-auto lower receivers.

Although the firearms cannot fire in automatic mode, the basic construction meets the description mandated by federal regulators of machine gun receivers, the company said in a statement on Dec. 28.

IWI also stressed in the statement that there are no safety issues involved with the recall, just the possible violation of federal law.

The pistol in question, called the GAP39, is a 7.62x39mm AK pistol part of the Galil ACE series of firearms, which takes elements of the Russian AK-47 and the Finnish Valmet RK 62, the company writes on its website. The pistol was introduced in April 2015.

All GAP39 pistols affected must be returned to IWI immediately and in exchange the company will either issue a refund or replace it with a legal two-pin (or two-hole) version. The company said allow up to four weeks for a refund or 90 to 120 days for a new gun.

IWI will then issue a “Return Authorization” number and will issue a “Call Tag” for a courier service to pick up at no cost. Returned firearms must have a RA# or they will be refused, the company said.