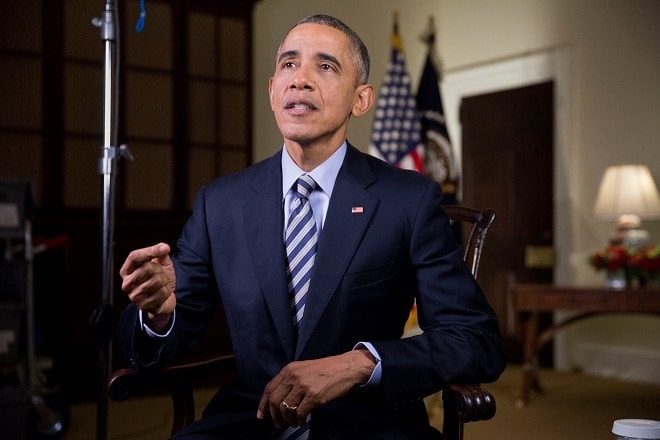 The President will take his case for more gun control to the country this week and Congress next week. (Photo: Whitehouse.gov)

On the cusp of potential executive actions targeting guns, President Obama is set to go on the offensive starting this week in a live event on Thursday.

The President will conduct a one-hour town hall with CNN’s Anderson Cooper at George Mason University in Fairfax, Virginia, at 8 p.m. Eastern, entitled “Guns in America,” which will include open questions from the audience.

This comes as the nation’s chief executive is set to meet with Attorney General Loretta Lynch on Monday to discuss tackling what he termed “our epidemic of gun violence” during his Weekly Address on Jan. 1.

While outright moves to mandate increased gun measures without the action of a Republican-controlled Congress may fall short legally, there could be incremental regulatory measures within his power to act upon unilaterally.

“A few months ago, I directed my team at the White House to look into any new actions I can take to help reduce gun violence,” said Obama Friday, perhaps setting the tone for his final year in office.

“Because I get too many letters from parents, and teachers, and kids, to sit around and do nothing,” he said. “I get letters from responsible gun owners who grieve with us every time these tragedies happen; who share my belief that the Second Amendment guarantees a right to bear arms; and who share my belief we can protect that right while keeping an irresponsible, dangerous few from inflicting harm on a massive scale.”

Since then, other gun violence advocates have piled atop the recommendation, urging presidential action, and Obama has met privately with Bloomberg.

Following this week’s town hall event, the President intends to commemorate the upcoming anniversary of the 2011 Tucson shooting that killed six and wounded then U.S. Rep. Gabrielle Giffords on Friday before addressing Congress at the annual State of the Union next week.

While Obama has shied away from bringing guns into his State of the Union speeches in recent years, 2016’s could be different, with the President last month mentioning stricter controls in his third-ever primetime Oval Office address.

Although no executive actions have been announced, GOP Presidential candidate Donald Trump in a campaign stop in Biloxi, Mississippi last week said he would “unsign that so fast” any Obama order once elected.