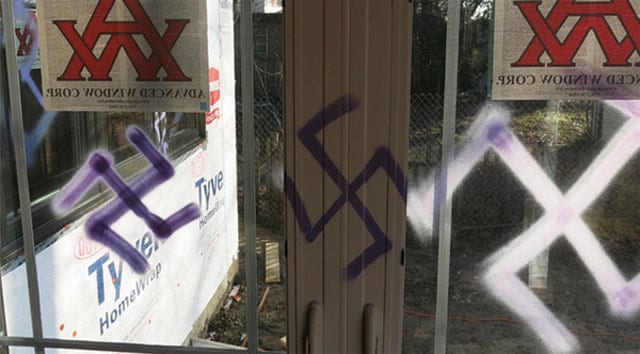 Authorities in Illinois are searching for the individuals responsible for spray painting swastikas on the windows of a newly constructed Riverside home.

The family, who are Indian descent, discovered the purple spray painted symbols on all 25 windows of the home on Christmas Day. According to a neighbor, the swastikas were not there at 11 p.m. the previous night. Investigators believe the family may have been specifically targeted.

“There is a great possibility that their ethnicity played a role,” said Riverside police Chief Tom Weitzel. “They have visited the property many times and have been seen by area residents there.”

The home was still under construction and partially open, but a lock on the gate leading to the property had been cut. Investigators found no evidence of further vandalism outside of “other wordage” found inside the home, of which Weitzel did not elaborate.

“As this is a disgusting incident and potentially a hate crime, I have assigned detectives to work on this specific case and put any resources they need towards the possible apprehension of the suspect(s),” Weitzel added.

Investigators found no physical evidence, such as shoe impressions, that could be used in the investigation.