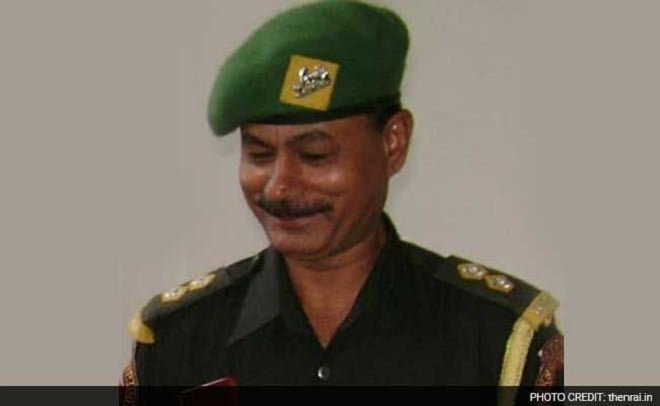 “My father always said speak up, fight for the truth, help good defeat evil. He gave his life for those values,” said Singh’s daughter. (Photo: NRAI)

Singh, 51, a retired Indian Army shooting instructor formerly attached to the Army Marksmanship Unit, joined the Defense Security Corps (DSC) in 2009 and was assigned to the detail at Pathankot Air Base last year. The DSC, made up of military veterans, serves a base protection role at the country’s military installations.

A winner of the no less than 69 marksmanship awards including the gold and silver medal in the 300m large bore event at the 1995 Commonwealth Shooting Championships, Singh was killed responding to an attack on the base by six terrorists last week.

The response to the attack, which occurred in the family housing area for DSC troops, also claimed the lives of seven security personnel in an 80-hour operation.

Singh was remembered for his skill and willingness to train others. Under Singh’s tutelage, the AMU produced several world champion shooters as reported by News 18.

“He was a very good shooter and was active in the sport till recently . He also used to train young shooters at the AMU whenever he got time,” AMU commanding officer Colonel Lalit Sharma told the Times of India. “He was a talented shooter and it is sad to hear about the news,” Sharma said.

“May Almighty grant peace to the Great Soldier. The shooting fraternity pray for the departed soul and strength to the family of great soldier to bear this irreparable loss,” the NRAI said in a statement.

Singh, who hails from a village in the Gurdaspur district the Punjab region, was carried to the funeral pyre with help from his daughter Madhu, 25, in a departure from tradition. She witnessed her father run out in his uniform to confront the terrorists at Pathankot while she sheltered in place during the extended gun fight.

“My father always said speak up, fight for the truth, help good defeat evil. He gave his life for those values,” she said.

As reported by the BBC, a Kashmir-based militant group, the United Jihad Council, has claimed responsibility for the attack.