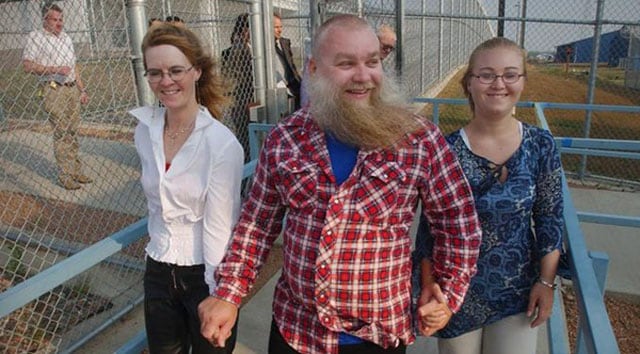 Steven Avery, center, was released from prison after serving 18 years for a crime that DNA evidence later proved he did not commit. –

Avery, 53, was convicted of Halbach’s murder in 2007 and is currently serving a life sentence without the possibility of parole. Avery’s nephew, Brendan Dassey, who was convicted of accessory to murder, is also serving a life sentence and will be eligible for parole in 2048. All along, Avery has maintained his innocence, while the handling of Dassey’s case has been questionable at best.

The nearly decade-old murder case was recently brought under the public eye thanks to the Netflix docuseries “Making a Murderer,” which was released last month. The 10-part series explores the life and trials of Dassey and Avery, including a previous wrongful conviction which left Avery serving nearly 20 years in prison for a crime he did not commit. 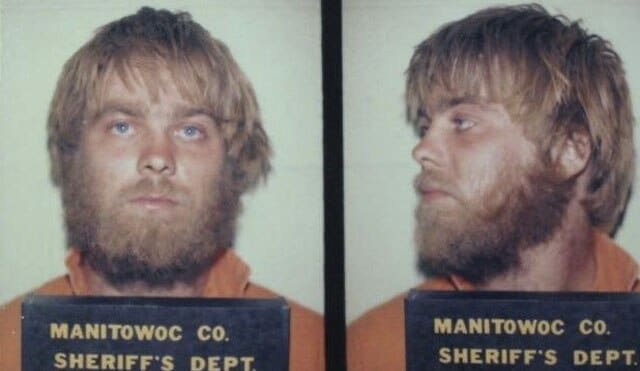 Mugshot of Steven Avery when he was wrongly accused – and convicted – of rape in 1985. (Photo: Manitowoc County Sheriff’s Office)

In 1985, Avery was convicted of the brutal rape of Penny Beernsten. Avery spent the next 18 years in prison – maintaining his innocence all along – until he was exonerated and released in 2003 after DNA evidence proved he was not the individual who committed the assault. Gregory Allen, who had a violent criminal history, including prior sexual assaults, was later convicted of Beernsten’s rape. Authorities later determined Allen raped two other women while Avery was wrongfully imprisoned for Beernsten’s assault.

Following his release, Avery filed a $36 million lawsuit against Manitowoc County and the individuals involved in his conviction. Avery’s attorneys say the case was handled badly from the beginning and what little evidence authorities did have on Avery was essentially manufactured.

But in the midst of the lawsuit, as depositions began to get underway, Avery was arrested again, this time for the murder of Halbach, who had gone to the Avery family’s salvage yard on the day she disappeared to take photographs of a vehicle for Auto Trader magazine.

Upon further investigation, authorities found a burned area in the yard near Avery’s home, with scattered traces of human remains, including bones and teeth, that was later determined to be Halbach’s remains. Inside Avery’s mobile home, the key to Halbach’s vehicle was also found, first seen by a law enforcement official who was previously named in Avery’s pending lawsuit with the county, despite the fact that those involved in the suit were not supposed to be working on the current case.

Do you think this evidence was planted? #MakingAMurderer pic.twitter.com/XqPQGhzCbd

Authorities determined that in her last hours, Halbach was beaten, stabbed, sexually assaulted and shot in the head. Dassey, who was 16 years old at the time, admitted to the details surrounding Halbach’s death, but video from the interrogation showed officers coaxed the answers from him. Dassey’s attorneys, as well as his mother, argue that the teen was targeted for a manufactured confession by law enforcement officials because of his low IQ, which is at a level that is considered an “intellectual disability” — a trait that both he and Avery share.

“You don’t want to muddy up a perfectly good conspiracy movie with what actually happened and certainly not provide the audience with the evidence the jury considered to reject that claim,” Kratz told People magazine.

The defense argued Avery was essentially being used as a sort of scapegoat in Halbach’s murder and even accused law enforcement of planting evidence – a claim which was adamantly denied. 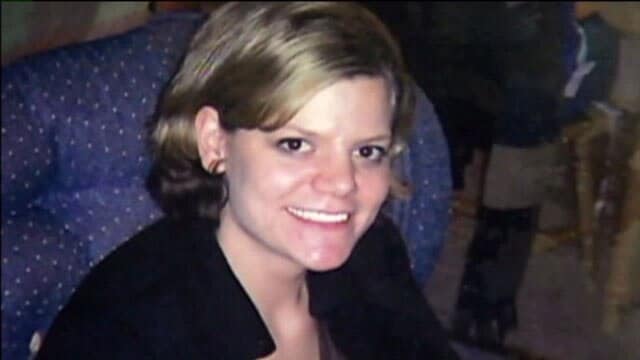 Teresa Halbach previously went to the Avery property, but was apparently “creeped out” by Steven Avery. (Photo: YouTube)

Some of the evidence left out of the film included that authorities found leg irons and handcuffs at Avery’s residence and Dassey’s mother said he and Avery cleaned the floor of Avery’s garage around the time of the murder, leaving her son’s blue jeans bleach-stained. Additionally, while in prison, Avery created elaborate drawings depicting the torture of women, and he was previously accused of at least two other sexual assaults, not counting the Beersten case.

While the film only shows a single spot of Avery’s blood in Halbach’s vehicle, it was in fact found in half a dozen places. A bullet recovered from Avery’s garage contained Halbach’s DNA and matched the type and caliber of a rifle belonging to Avery.

On the day Halbach was killed, Avery – under a false name – called Auto Trader to specifically request Halbach come to the property to take the pictures and called her phone three times that day, twice attempting to hide his number using the star-67 feature. In addition, Halbach had previous encounters with Avery that left her feeling uncomfortable and not wanting to return to the property. Kratz claims Halbach was “creeped out” by Avery.

Still, Avery’s defense attorney Dean Strang said his client remains hopeful that new evidence will once again be discovered to prove his innocence.

Meanwhile, as theories abound surrounding the case, the petitions gather ground. The Free Steven Avery petition on Change.org has garnered over 240,000 signatures, while a White House petition currently has close to 43,000 signatures.