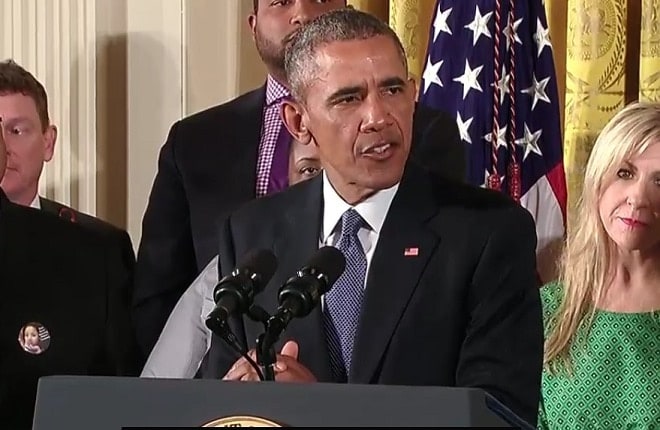 President Obama unveiled a number of executive actions on guns Tuesday to a mixed response.

A series of directions, orders and memos were set in motion Tuesday by President Obama in an effort to reduce gun violence.

The President, joined by Vice President Biden, Connecticut Gov. Dannel Malloy and a number of gun control advocates and violence survivors, announced the actions in the White House’s East Room.

The remarks were foreshadowed by the release by the administration late Monday of the chief executive’s detailed plan that includes funds for mental health, adding 230 jobs at the FBI to help reinvigorate and expand the background check system, and another 200 ATF agents to help investigate regulatory violations.

The President was introduced by Mark Barden, whose son Daniel was one of the 26 victims of the Sandy Hook Elementary School shooting in Newtown, Connecticut, in 2013 who advocated that, “Every gun related death is preventable.”

Once taking the podium, Obama acknowledged the crowd. “Hundreds of thousands of Americans have lost brothers and sisters or buried their own children,” he said. “In this room right here, there are a lot of stories. There is a lot of heartache. There is a lot of pain.”

Then, after reciting a condensed version of the failure of the Manchin-Toomey expanded background check bills, referencing Internet gun sales research complied by former New York Mayor Michael Bloomberg’s Everytown group, and advising that gun control works in China where mass stabbings take fewer lives, the President argued that something had to be done.

“The constant excuses for inaction no longer do. No longer suffice. That is why we are here today. Not to stop the last mass shooting but to prevent the next one,” Obama said and added, “The gun lobby may hold Congress hostage but they don’t hold America hostage.”

He then outlined the steps taken by the administration to including bringing the National Instant Background Checks System “into the 21st century,” stepping up mental health funding while plugging Obamacare, announcing that criminals could no longer “hide” behind gun trusts for certain gun purchases by requiring background checks on individuals tied to them, and directing research be done by the Departments of Homeland Security, Justice and Defense into so-called “smart guns.”

The President continued his remarks by calling on Congress to take further action, saying, “put your money where your mouth is” and closed by celebrating the actions of Zaevion Dobson, a Tennessee high school football player who was killed shielding three female friends from gunfire in a shooting three weeks ago.

Gun control advocates to include Everytown, Moms Demand Action and former U.S. Rep.Gabby Giffords’ Americans for Responsible Solutions praising the action taken by the President, racing each other to post graphics online touting the apparent victory in the fight against gun violence.

“The Executive Orders announced by President Obama today are a positive step toward making our communities safer,” Coalition to Stop Gun Violence Executive Director Josh Horwitz, on hand at the White House for the event, told Guns.com. “While this Congress continues to sit on its hands and do nothing to prevent the next gun-related tragedy, this President showed real leadership and took decisive action to keep guns out of the hands of dangerous individuals.”

One continuous aspect of the President’s orders, that of setting a limit of how many firearms an individual can sell and still be “engaged in the business” at as few as two guns when other factors are present, seemed a big win for the gun control lobby.

Although they campaigned for tighter restrictions on private gun sales, suggesting setting a defining limit of 25 or more firearms sold in a one-year period, Everytown on Tuesday backed the White House’s much stricter definition by saying, “This executive action will not affect the many law-abiding gun owners who truly trade and sell guns occasionally or as a hobby.”

“While President Obama announces new executive orders on gun control, a new poll shows very few Americans actually care about the issue,” posted the National Rifle Association to social media. “So not only is the president defying the will of Congress, he’s also ignoring the American people – who are actually buying firearms and exercising their Second Amendment rights in record numbers.”

This sentiment was echoed by Alan Gottlieb, chairman of the Citizens Committee for the Right to Keep and Bear Arms, who told Guns.com Tuesday that the lingering effect of President Obama’s administration may not be his gun control legacy, but rather his track record at driving gun sales.

“Obama wants more background checks and he is only accomplishing it by having more people buy firearms because of his anti-gun rights agenda and attacks on the Second Amendment,” Gottlieb said. “We now have a record number of background checks done every month. His actions have backfired.”

Indeed, one of the President’s actions is unveiled this week was to expand the FBI’s background check service hours to 24/7 operations rather than the current 17 hours a day while adding some 230 staff to help accomplish the task.

The raw data from the FBI shows that in December 2015, the agency conducted 23,141,970 checks, not only a record for last year, but also an all-time record since the system was established in 1998. Further, five of the top 10 highest weeks for firearms background checks on record occurred in 2015.

To the President’s call to further research into smart guns, citing roadblocks to the technology from the gun lobby, the National Shooting Sport Foundation responded in a statement that, while they do not oppose the concept, “We would continue to oppose mandates for this technology, particularly since there are well proven existing methods to secure firearms, and firearms accidents are at historic low levels.”