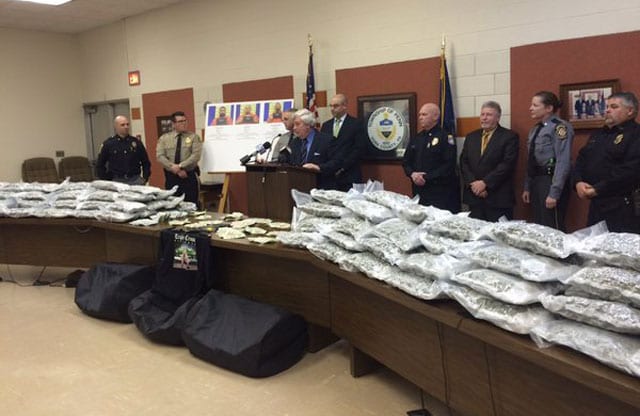 Three men were arrested in West Manhiem, Penn., Monday after authorities discovered 247 pounds of marijuana, but among one of the suspects was an out-of-state drug task force agent.

“I’ve been out here 28 years and this is the biggest I’ve seen in our area,” West Manhiem police Chief Tim Hippensteel said, adding that the takedown was part of an ongoing and coordinated effort between local and federal officials.

“Suffice it to say that this was not a routine traffic stop,” Hippensteel said. “We didn’t stop this person because they had a bad turn signal and found all this. This was part of a coordinated effort.”

Along with the marijuana, which has an estimated street value of around $2 million, authorities also seized $11,000 in cash. Ryan Falsone, 27; Tyler Long, 31; and Christopher Heath, 37, were all arrested and face charges for multiple drug-related offenses.

During the arrest, authorities discovered that Heath, who was carrying his badge and service weapon, was a drug task force agent with the Yuba County Sheriff’s Department in California. He was reportedly on vacation at the time of the bust.