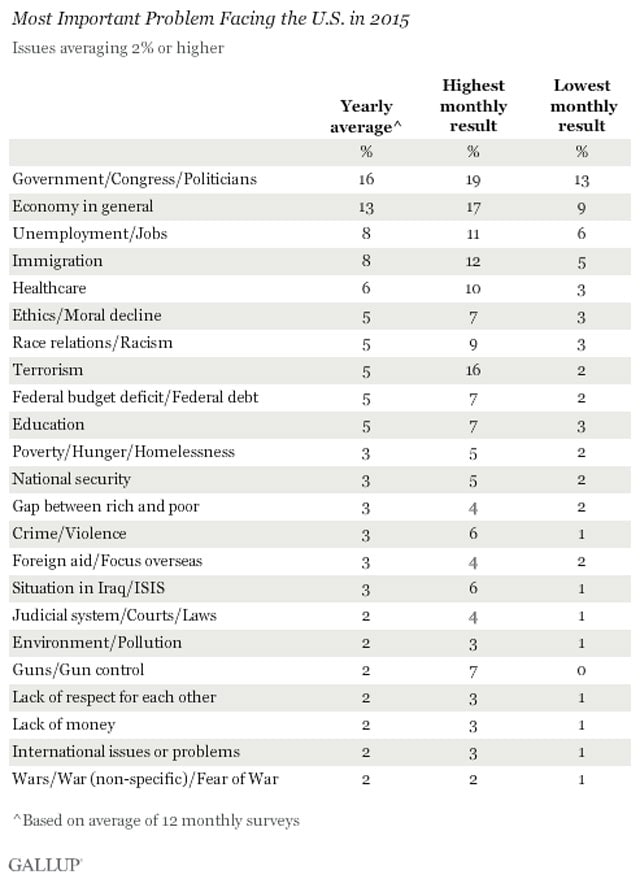 Statistics published Monday by Gallup show Americans are more concerned about government, Congress and politicians than guns and gun control.

Guns and gun control came in at number 19, with an average of only 2 percent of participants saying it was their biggest concern. The months that showed greater concern over guns were October and December — months in which mass shootings topped headlines.

Issues that proved more important to respondents than guns and gun control included the environment, the judicial system, foreign issues, poverty and homelessness, education, terrorism and race relations, among others.

Topics that were less pressing to Americans than guns and gun control included lack of respect for one another, lack of money, international issues, and wars or the fear of war.

As for the top four, Americans voiced more concern over government than any other hot-button issue. “Government” included the lack of satisfaction with President Obama, Congress and other government leaders, as well as concern over the ethics of politicians and political conflict.

The poll results were published the day before President Obama announced a number of executive actions aimed at reducing gun violence.

Among the actions he wants taken are expanded background checks and federal licensing of “anybody in the business of selling firearms.”

The measures includes adding 200 federal agents to the Bureau of Alcohol, Tobacco, Firearms and Explosives and another 230 jobs will open up with the FBI’s background check system, expanding the system for 24/7 availability.

Also, the mental health and criminal reporting aspect of the background check system will also receive an overhaul.