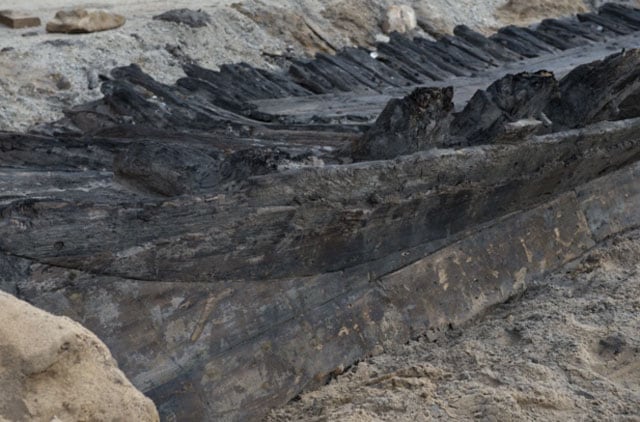 Partial remains of a large wooden ship, estimated to have been used sometime between 1775 and 1789, was recently discovered at a hotel construction site near the Potomac
River in Alexandria, Virginia.

“It’s very rare. This almost never happens,” said Dan Baicy, field director for Thunderbird Archeology, the firm looking for signs of historical artifacts during the construction project. “In 15 years that I’ve done this work, I’ve never run into this kind of preservation in an urban environment where there’s so much disturbance.”

The portion of the ship measured nearly 50 feet long and was believed to be about one-third of the original vessel, which was thought to be either a large cargo or military ship. Baicy explained that once the ship was buried beneath the earth, no oxygen could get to it, keeping it almost perfectly preserved.

The historical artifact was taken apart, piece by piece, by naval archaeologists on Monday, and the pieces will remain preserved in water until a permanent home is found. Fran Bromberg, the city’s archaeologist, said “it’s certainly a possibility” to reconstruct the vessel to put it on display, but such an undertaking would be costly and require a special fundraiser.