Did Mike Rowe rob a bank? 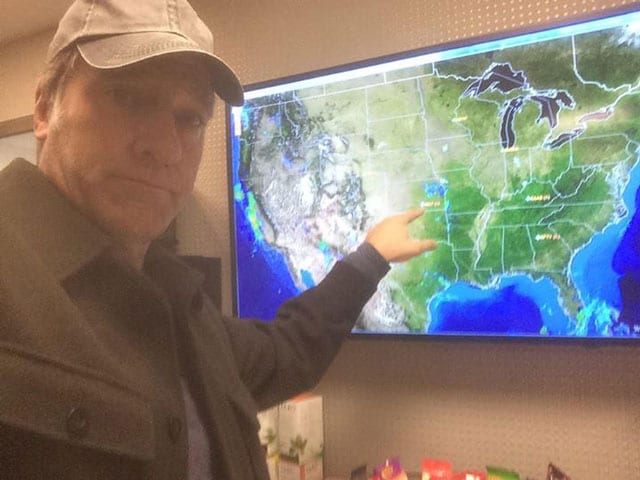 Mike Rowe points to the place on a map where he was on the day in question. (Photo: Facebook)

Police in Medford, Oregon, are on the lookout for a man who robbed a bank Monday and posted still shots from video surveillance to their Facebook page in hopes the public could help identify him. However, some say the culprit looks strikingly similar to Mike Rowe, the man best known for hosting the hit series “Dirty Jobs.”

Authorities described the suspect as “standing about 5’6″ – 5’8″ inches tall.” He’s obviously a white male, seen wearing a sweatshirt, ball cap and blue jeans – classic Rowe attire. So the world wanted to know, Mr. Rowe, where were you at the time of the robbery and is knocking over a bank your next idea of a so-called “dirty job?”

The photos apparently gained so much attention that Mike Rowe decided he should respond to the accusations via Facebook.

Rowe admitted he could see the similarities pointed out by some and even admitted to being “spotted in Medford on more than once [sic] occasion,” but assured everyone he was not responsible for the robbery, pointing out some obvious discrepancies in the case against him.

One of Rowe’s theories included that the robber, who he referred to as “an idiot,” could have been wearing a “Mike Rowe Mask,” which he claims really do exist and even saw a lady wearing one at a Halloween party a couple of years ago.

“And I don’t mind telling you,” Rowe continued, “It scared the hell out of me.”

Rowe concluded his post by wishing authorities luck in catching the culprit, but not before revealing he was in Kansas on the day of the robbery, saying he could prove it, if need be.

More pictures of yesterday's bank robber. We are hoping that these photos at different angles will help someone…

To The People of Medford Oregon,Those of you up to speed with the Medford Police Facebook Page, (one of the finest…