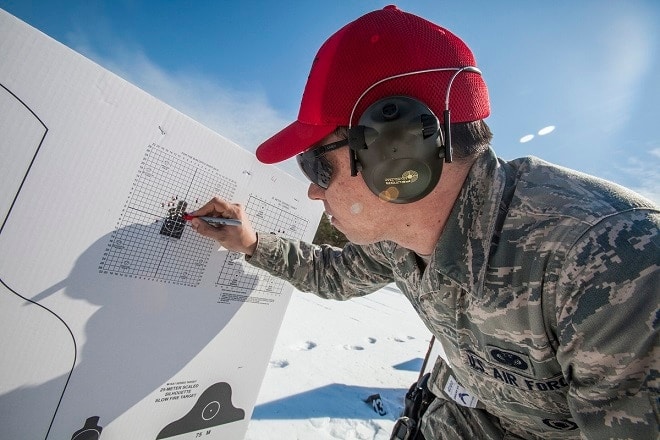 The armed forces and others are now being tasked with furthering the development of smart gun technology including tracing lost guns and locking them against unauthorized use. (Photo: Master Sgt. Mark C. Olsen/Department of Defense)

Buried in President Obama’s list of actions on guns this week was a directive for Homeland Security, DOJ and the Pentagon to get on board with gun research and adoption.

The fourth of four talking points released by the White House Monday ordered the Departments of Defense, Justice and Department of Homeland Security to take a two-pronged approach to “promote smart gun technology” that would include furthering research and considering whether including such technology in future weapon systems would be practical.

The President touched briefly on the subject in remarks this week.

“We need to develop new technologies that make guns safer,” said Obama Tuesday in a press conference on his actions. “If we can set it up so you can’t unlock your phone unless you’ve got the right fingerprint, why can’t we do the same thing for our guns? If there’s an app that can help us find a missing tablet…if we can do it for your iPad, there’s no reason we can’t do it with a stolen gun.”

The White House released the official memorandum for publication in the Federal Register on smart guns further detailing the directive.

First, the departments are authorized to sponsor research into gun safety technology that would reduce the frequency of accidental discharge or unauthorized use of firearms, and improve the tracing of lost or stolen guns. The Attorney General and Secretaries of Defense and Homeland Security have three months to assemble a joint report to the Oval Office on just how they plan to implement this, notably without affecting current budgets.

Although the current year’s defense spending bills have already been signed and the President is in his final year in office, he still could attempt to include funding for such proposed research in the FY17 budget, which will be up for debate in coming months.

Next, the departments are to examine the operational needs of their reporting agencies to see if and how they can incorporate such technology into future firearms acquisitions.

The National Shooting Sports Foundation, the trade organization for the firearm industry, repeated their contention that the industry has never opposed development of smart-gun technology, but urged caution on mandates for its use.

“How additional government research into this technology would advance it is unclear,” said the NSSF in a statement. “Law enforcement agencies and consumers themselves will have to make the determination whether acquisition of firearms with this technology ‘would be consistent with operational needs,’ as the White House itself states. We would continue to oppose mandates for this technology, particularly since there are well proven existing methods to secure firearms, and firearms accidents are at historic low levels.”