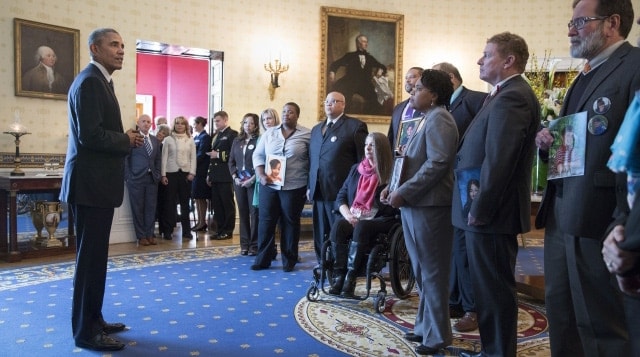 In the Blue Room of the White House, President Obama talks with people whose lives have been impacted by gun violence, prior to announcing his executive actions, Jan. 5, 2016. (Photo: White House/Pete Souza)

While they disagree with the details in the President’s plan, the key initiatives align with the longtime rhetoric of the National Rifle Association and National Shooting Sports Foundation.

Both the NRA and NSSF have long criticized NICS for incomplete record keeping and lack of accessibility. Obama’s plan would reform the system to ensure thoroughness by requiring states to report complete criminal records to the system, and assist the agency tasked with managing NICS, the Federal Bureau of Investigation, by digitizing files and doubling the workforce. With an additional 230 employees, the system would operate 24 hours a day and seven days a week.

In its response, the NSSF said it supports further resources being allocated to NICS staffing and increasing operational hours. The lobby launched a similar effort in 2013 to improve the system, the FixNICS program, with the stated goal of improving how states report criminal records.

However, the two plans differ in that the NSSF pushes to incentivize the system by awarding grants to states that comply because, it says, the feds cannot legally require them to do so, according to the program’s website. Other than directives from the U.S. Attorney General, it’s unclear in Obama’s plan how the feds will require states to reform their processes.

Also, the executive action attempts to improve state reporting of those deemed mentally unfit to buy a firearm, and proposes a $500 million investment to increase access to mental health care. The plan includes removing “unnecessary” legal barriers preventing states from reporting relevant information by having the Department of Health and Human Services issue a final ruling on what private information protected by law is allowed to be reported and what isn’t.

The NSSF has also supported efforts to refine mental health reporting and the FixNICS program has succeeded in getting legislation passed in more than a dozen states, according to the program’s website. The lobby said it “welcomes” the Administration’s attention to the issue.

The NRA, on the other hand, has butted heads with the Administration in the past year over methods similar to those stated in the executive action.

Last year, the NRA responded to the Administration’s attempt to prohibit Social Security beneficiaries who lack the mental capacity to manage their own finances from owning firearms by supporting two bills that would clarify the process to adjudicate an individual as mentally unfit to buy a gun under the Gun Control Act’s mental health provision.

Sen. John Cornyn, the Texas Republican who introduced the first bill in August, said the Mental Health and Safe Communities Act would fix the existing background check system without expanding it, bolster treatment options for mentally-ill offenders, and design response and prevention plans for local officials.

The NRA also applauded U.S. Rep. Martha McSally, an Arizona Republican, for introducing her own version of the Mental Health and Safe Communities Act in the House in October.

The other key initiative of Obama’s executive action is increasing enforcement of federal gun laws, something the NRA advises as part of its boilerplate response to gun control legislation. NRA leader Wayne LaPierre even repeated it in his response to the plan. “Enforce the federal gun laws against every criminal thug on the street,” he said and added individuals who fail a background check should also be prosecuted.

In October, LaPierre shared the same sentiment after Obama rallied for improving background checks in his address to the International Association of Chief’s of Police.

“If the president held a press conference tomorrow morning and directed every federal jurisdiction to round up every felon with a gun, drug dealer with a gun and criminal gangbanger with a gun, law enforcement would have thousands of violent thugs in handcuffs and squad cars by sundown,” LaPierre said in his rebuttal.

Additionally, the NSSF said this week, “We have long called for the effective enforcement of the numerous laws already on the books regarding the criminal misuse of firearms and would encourage the administration to carry through on this directive.”

To fulfill the goal, the President proposed adding 200 more agents and inspectors to the agency tasked with enforcing federal gun laws, the Bureau of Alcohol, Tobacco, Firearms and Explosives, and also proposed altering the agency’s focus to crackdown on unlicensed gun dealers, specifically online.

According to literature published by the ATF, the agency determines who is “engaged in the business” of dealing firearms through a series of factors, but they ideally define it as someone who buys and sells firearms with the principal motive of making a profit. Issues are raised because licensed dealers must comply to federal standards that most private sellers do not.

The NSSF raised concerns over the criteria for what will constitute as “engaged in the business” of dealing firearms because, as the ATF admits, federal law does not establish a “bright-line” rule for activities that require a dealer’s license. The NSSF said the initiative “needs considerable clarification and raises questions about enforceability.”