Hellfire missile sent to Europe somehow ends up in Cuba 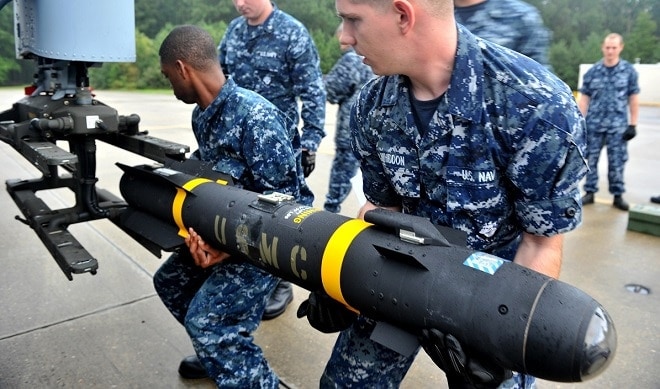 The 108-pound Hellfire is popular in U.S. service and with over 25 approved Allies, though Cuba isn’t (officially) on that list. (Photo: Petty Officer 3rd Class Scott A. Raegen/U.S. Navy)

In what is being termed one of the worst losses of sensitive military tech, a Hellfire missile sent to Europe for a training exercise in 2014 landed in Cuba and Castro still has it.

In a story broken in Friday’s Wall Street Journal, an inert training version of the Hellfire anti-tank missile, popularly used on U.S military helicopters and drones for over thirty years, was shipped from Orlando International Airport by contractor Lockheed-Martin in early 2014.

Then, after being used in a NATO exercise in Rota, Spain, it was loaded on a truck bound for Frankfurt, then home to the U.S. Rhein-Main Air Base. However, instead of catching the eagle back to the states or being stockpiled in Germany, the missile somehow wound up on a plane in the only Communist country in the western hemisphere, possibly through confusion with a third party shipping company.

Since realizing the Hellfire went unaccounted for, U.S. officials have asked Havana a few times if we could get our wandering bunker buster back, but so far the Cubans still have it.

“Now it’s a proliferation concern—someone else now understands how it works and what may have been cutting edge for us is deconstructed and packaged into what other players sell on the open market—and possibly provided to countries that we wouldn’t sell to,” Peter Singer, a senior fellow at the New America Foundation, told the WSJ.

U.S. Sen Marco Rubio, R-FL, who besides being a GOP candidate for the White House in November, also serves as chair of the Senate Foreign Relations Subcommittee on the Western Hemisphere, blasted Assistant Secretary of State for Western Hemisphere Affairs, Roberta S. Jacobson in a letter just after the story broke.

“[T]he fact that members of Congress are reading about Cuba’s possession of a U.S. missile in the newspaper rather than from you or other State Department officials is astounding and inexcusable,” said Rubio before dropping the gauntlet of a possible cover-up.

“The fact that the administration, including you, have apparently tried to withhold this information from the congressional debate and public discussion over U.S.-Cuba policy is disgraceful,” he wrote, asking why the return of the missile was not obtained as a result of the negotiations that led to President Obama’s December 17, 2014 announced change in U.S. policy toward Cuba.