Texas open carry a week later: gunfights in the street or all quiet on the Austin Front? 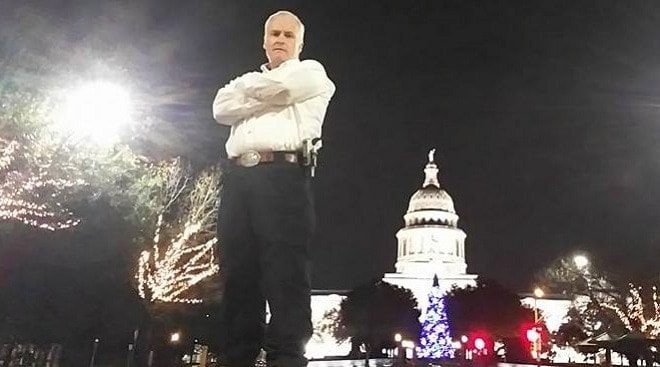 Predictions of chaos and pandemonium from those against open carry in the Lone Star state so far seem off base as the nation’s second most populous state kicked off the practice.

Despite earlier warnings from urban police chiefs that said open carry meant, “open season for gang members, drug cartels, outlaw motor cycle gangs and any other criminal or extremist to defy the law with impunity,” the common thread in reports across the state this week was one of quiet.

As of Thursday, Dallas police say they have received zero 911 calls concerning open carry since the new law went into effect Jan. 1. Similar reports from the West Texas border hub of El Paso, suburban Katy, Austin and Houston filtered in throughout the week.

Tim Ryle, director of the Texas Police Association, said he’s seen no increase in gun-related incidents since the open-carry law took effect while Steve Westbrook, director of the Sheriffs’ Association of Texas, echoed those sentiments, saying, “It’s as quiet as a church house mouse.”

One of the most vocal advocates that helped push the new law through was Open Carry Texas President CJ Grisham.

“One week in, Texas follows every other state that has recently passed open carry or unlicensed carry without a problem,” Grisham told Guns.com Friday. “The predictions of gloom and doom, blood in the streets, Hollywood-style shootouts and chaos have predictably been absent.”

About the only perceived push back that handgun permit holders choosing to open carry have seen is in local businesses and restaurants that have chosen to post the new 30.07 signs — ironically being sold by the Texas Democratic Party.

One BBQ joint in Houston in return received an apparent threat over the Internet following posting such a sign while Texas Wal-Mart locations have staff on pistol patrol out of an abundance of caution.

“We do try to ensure that people have a licensed firearm,” said Wal-Mart spokesman Brian Nick. “We are giving direction to our store employees to ask for a license as our management sees appropriate.”

Other business owners embracing the change, contends Grisham, offset even this friction.

“My members are telling me that they have had zero issues with law enforcement, scared citizens, or businesses telling them to leave,” Grisham said. “While it does appear that more businesses are putting up signs, there are also more places publicly announcing not only that open carriers are welcome, but that they will receive a discount for doing so.”

Gun control advocates, who are also helping to distribute signage while maintaining a database of businesses displaying the no-guns placards, contend they will be boycotting establishments that cater to open carriers.

“I, like many American mothers, have decided that if I do see someone openly carrying a gun in a public place, I will immediately leave that place. And I will also share with the manager or headquarters why I left,” said Austin Moms Demand Action leader Nicole Greene.

Texas was the 45th state to adopt open carry.