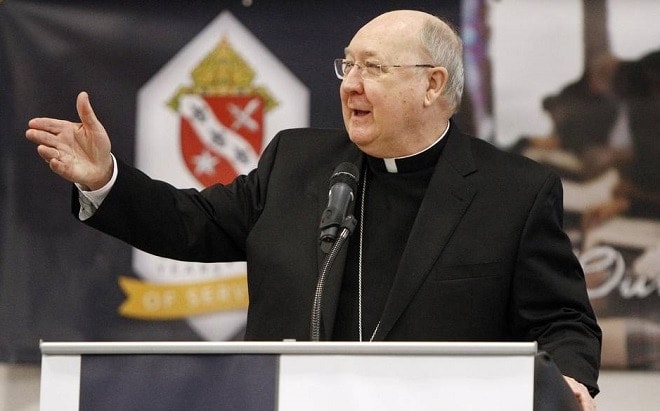 Dallas Bishop Kevin J. Farrell, is not a fan of open carry on church grounds saying it will only lead people “to feel threatened and intimidated.” (Photo: Brandon Wade/Dallas Morning News)

In response to a Texas law effective this month to allow openly carried handguns, the bishop to one of the largest diocese in the state decried “cowboy mentality” and declared church grounds off limits.

Irish-born Bishop Kevin J. Farrell, head of the million-member Catholic Diocese of Dallas spanning 10 counties and 80 parishes, posted a “Response to Open Carry” on his official website this week slamming the practice.

“Sadly, Texas has become the 45th state to embrace the cowboy mentality that permits the open carrying of guns,” Farrell said. “It is difficult to see how this new law allowing persons with concealed handgun licenses (CHL) to openly carry firearms can accomplish anything other than cause people to feel threatened and intimidated.”

As such, the prelate ordered signage posted — allowed under state law — that bans the possession of any weapon in any facility owned, leased or operated by the diocese except as allowed in a new weapons policy adopted this month.

The only exceptions under the policy are for ceremonial swords such as those used by the Knights of Columbus, personal firearms owned by members of the clergy in their own residences on church grounds, security guards contracted by the diocese and police.

“This policy is rooted in the belief that our churches, schools and other places of worship are intended to be sanctuaries – holy sites where people come to pray and participate in the ministry of the Church,” said Farrell.

Farrell is not the first Catholic bishop to respond to gun rights expansions with more gun free zones.

Besides his guidance on open carry on church grounds, Farrell, appointed to his position by Pope Benedict XVI in 2007 to replace the retiring Bishop Charles Victor Grahmann, also voiced support for President Obama’s recent executive actions before voicing his own interpretation of the Second Amendment.

“It is absurd that terrorists, criminals, and mentally unbalanced people can freely and openly buy weapons not intended for sport, but designed to kill people,” Farrell said. “Writers of the Second Amendment envisioned smooth bore muskets and not semi-automatic and automatic weapons of war.”

This brought swift comparison from gun rights advocates in the Lone Star State between the bishop’s interpretations of what is allowed under the First Amendment versus the Second.

“It is the height of ignorance for Bishop Farrell to believe that the founders envisioned the world would never progress beyond the 18th century,” he said. “Besides, if he even bothered to educate himself, he would know what a Puckle Gun was and would know that the founders were very aware of automatic weapons nearly 100 years before the Second Amendment was ratified. Don’t worry Bishop; we won’t use our Second Amendment rights when they come for your first.”