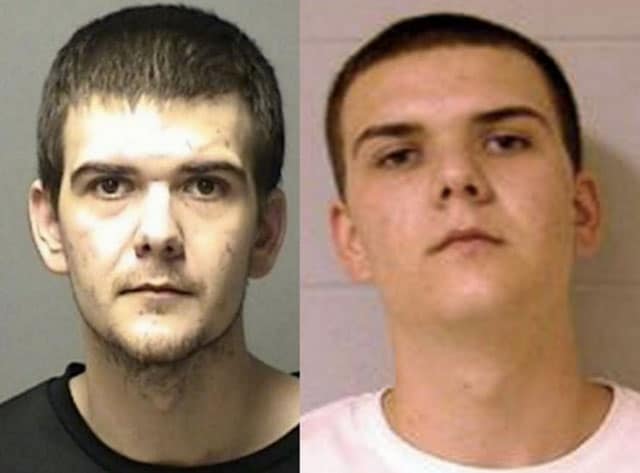 Michael Bontaites’ most recent mugshot, left, and a mugshot from 2012, right, when he was arrested after he pulled a knife on a woman. (Photo: Union Leader)

A 23-year-old man is recovering from a gunshot wound after he attempted to rob a grandmother outside of her Manchester, New Hampshire, home Monday night.

The 65-year-old woman, who did not wish to be identified, stopped at a gas station after leaving work around 11:30 p.m. As she headed home, she noticed a dark sedan quickly pull behind her at a traffic light, then continue to tail her car. She became increasingly concerned when the vehicle followed her into the parking lot at her apartment complex.

The woman said she tried to park as close to the door as possible, but the other car pulled in not far from her. She swiftly exited her car, but heard a car door close right after hers. As she walked toward the door, she heard someone walking behind her and briefly turned around to see a man, who was wearing a dark-colored hoodie, following her.

“Something in my head said to take the gun out of my purse,” the woman told a local ABC affiliate.

The woman took her gun from her purse and placed it in her coat pocket, keeping her hand on it all the while.

“Ten feet from the front stairs. That’s when he caught up to me, and he came around me and stood right in front of me. Right in my face,” the woman said.

She said the man started yelling at her, but when he reached up his left arm to grab her, she pulled the gun from her pocket and shot him a single time in the chest. The man immediately fell to the ground and the woman rushed inside to call 911.

Meanwhile, a woman got out of the car that the suspect was in and came to his aid. The victim said the woman was yelling at her, saying she had to get the man to the hospital.

As officers were responding to the victim’s call for help, another officer located the suspect at the emergency room of a nearby hospital. He was identified as Michael Bontaites, was arraigned from a hospital bed Tuesday and charged with felony robbery.

Police confirmed that the woman has had a valid concealed carry permit for the last 10 years, but she said in all that time, that night was the first time she ever shot it.