Oregon standoff enters second week; Ranchers refuse to back down 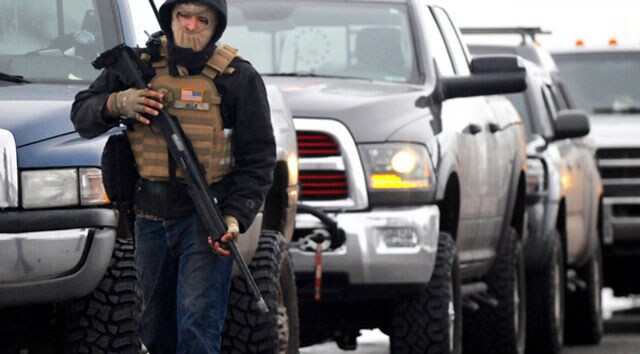 Members of the organization Pacific Patriots Network drove to Burns, Oregon, over the weekend with “articles of resolution.” (Photo: Mark Graves / Oregon Live)

Armed ranchers at a wildlife refuge outside of Burns, Oregon, head into their second week occupying the federal land with no signs of stepping down, despite weekend visits from several elected officials and another organization of armed citizens attempting to act as a mediator between the group and the government.

The armed ranchers, led by Ammon Bundy, son of Nevada rancher Cliven Bundy who was engaged in a similar standoff with the Bureau of Land Management in April 2014 over grazing rights, are unhappy with what they say is the unconstitutional imprisonment of two local ranchers. The group has also showed concern over what they perceive as overreach of the federal government onto the land, which they say rightfully belongs to the county, not the feds.

So far, the protest has remained peaceful, but as the days now begin to drag into weeks, some are looking for resolution.

Despite pressure from local officials, as well as the Federal Bureau of Investigation, not to do so, Oregon State Representative Dallas Heard, of Roseburg, along with five other out-of-state elected officials, made their way to the Malheur National Wildlife Refuge headquarters building, where the protesters are staged, on Saturday for what Heard described as a “fact-finding mission,” local media reported.

Heard, who referred to himself as an “elected representative of the people,” and likened his job to a shepherd taking care of his flock, said he was concerned that the standoff would end with an armed assault by local law enforcement. However, Grasty, who did not shy away from showing his discontentment with Heard, assured that such an assault would not happen.

“I find it really interesting that not only did law enforcement advise him not to go out there, [but] it seems to me that we now have a state representative who will not listen to local input,” Grasty said. “And isn’t that the same thing that our armed visitors are saying about the federal government? It’s the same thing.”

Grasty called it “offensive” that out-of-towners were attempting to represent the locals and their affairs.
But another group of about two dozen members from the Pacific Patriots Network also showed up over the weekend to offer “articles of resolution” to the ranchers. The group, which is self-described
as a type of citizen’s first responders aimed at protecting “life, liberty, property and the environment of our communities,” hoped to act as a sort of mediator between the protesters and the government agencies involved in the dispute.

“The primary aim of the PPN’s presence is to facilitate discussion concerning all parties involved and to establish open communication towards a peaceful resolution while maintaining civility within Harney County” the group said in a statement Sunday.

But the goal of communication and overall presence at the facility was met with opposition from Bundy and the other protesters. 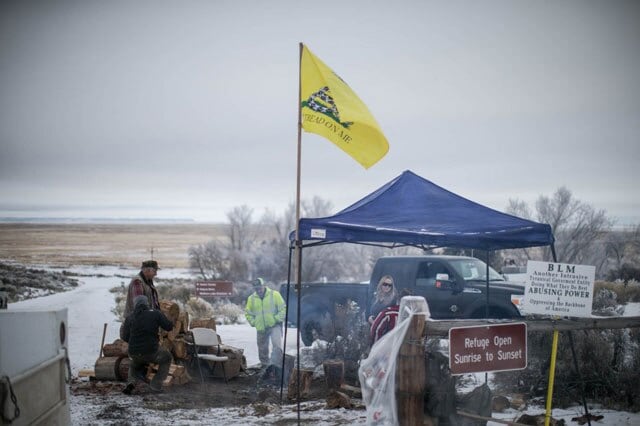 “Upon arriving in Harney County, The PPN has observed an extreme lack of substantial, in-depth communication as it pertains to a peaceful resolution at the Malheur National Wildlife refuge, resulting in a communication stalemate,” the group confirmed.

Todd MacFarlane, Bundy’s attorney, who is also acting as mediator representing the protesters, made it clear that Bundy did not want the group there.

“We don’t need that. We don’t want it and we’re asking you to leave,” MacFarlane said was Bundy’s message to members of the Pacific Patriots Network, whose presence, according to Macfarlane, “alarmed” the protesters.

Nonetheless, some members of the Pacific Patriots Network remained at the refuge to offer a “perimeter of protection,” while spokesman for the network, Joseph Rice, confirmed the articles of resolution were still to be delivered to the appropriate government agencies.