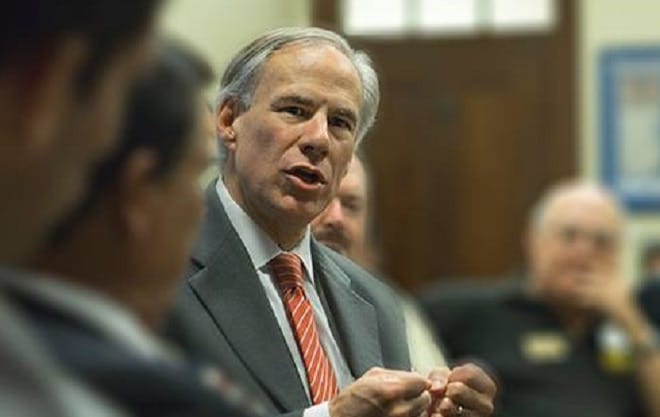 Gov. Greg Abbott wants Texas to join with another 33 states to shore up the Constitution. (Photo: gov.texas.gov)

Texas Gov. Greg Abbott is calling for a convention of states to end the “dysfunction in Washington, D.C.” by adding a host of new amendments to the Constitution.

Abbott, a former Texas Supreme Court justice appointed by then-Gov. George W. Bush and later state attorney general before winning his current office, is seeking to use a procedure allowed under Article V of the U.S. Constitution, which allow 34 states to call a constitutional convention, where new amendments can be proposed.

“The increasingly frequent departures from Constitutional principles are destroying the Rule of Law foundation on which this country was built,” said Abbott last Friday at the Texas Public Policy Foundation’s Annual Policy Orientation, where he introduced his sweeping plan.

“We are succumbing to the caprice of man that our Founders fought to escape,” said Abbott. “The cure to these problems will not come from Washington D.C. Instead, the states must lead the way. To do that I am adding another item to the agenda next session. I want legislation authorizing Texas to join other states in calling for a Convention of States to fix the cracks in our Constitution.”

Abbott’s 92-page plan, which he intends to ask the Texas Legislature to endorse, would ask for nine new amendments to the Constitution:

These, when taken as a whole, would dial-back the power of the all three branches of the federal government substantially and, while gun politics are not mentioned directly in the amendments, recent actions by the White House and Supreme Court are cited in the plan as justification for the new limits.

“The President has taken executive actions to infringe the Second Amendment rights of millions of lawful gun owners, even though the entire point of the Bill of Rights was to protect Americans from invasions of their liberties,” reads Abbott’s plan.

Recent narrow 5-4 Supreme Court victories on cases with far-reaching outcomes — including Second Amendment issues — are held up as a reason to move to a super majority.

“In modern America, the policy preferences of five robed unelected septuagenarians will trump even the most politically popular legislation on virtually any topic—from voting rights to abortion to religion to speech to criminal procedure to guns to healthcare to the environment,” reads the plan.

However as some point out, such a move to require seven judges on the bench to sign off on a ruling would have in the past voided important gun rights wins such as the Heller and McDonald cases, which were both decided by 5-4 margins.

As noted by the National Constitution Center, while all 27 post-1791 amendments to the Constitution have been proposed by Congress, there have been numerous attempts by states to call a convention over the years, but all have stalled.

Just 19 states, to include Texas, have solid GOP control to include legislature and governors, further making Abbott’s attempt to make the magical 34 number a long shot without finding some compromise with Democratic lawmakers. Still, with election year politics at play at least one Presidential contender has gone on record as backing a convention.

“As president, I will promote a convention of states to amend the Constitution and restore limited government,” wrote U.S. Sen. Marco Rubio, R-FL, in an editorial published by USA Today two days before Abbott’s declaration. “The framers of our Constitution allowed for a constitutional convention because they knew our citizens were the ultimate defense against an overbearing federal government.”