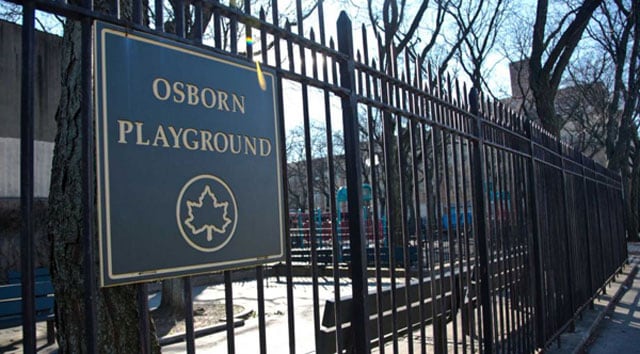 Brooklyn Borough President Eric Adams, who noted that cases of rape and sexual assault in the city are on the rise, called for improved safety measures, such as better lighting, in public places like the playground where the attack occurred. (Photo: Bebeto Matthews / Associated Press)

An 18-year-old girl is recovering from a heinous sexual assault that occurred while she was walking through a playground in the Brownsville area of Brooklyn Thursday night with her father, while authorities vow to serve up swift justice to her attackers.

Just after 9 p.m. at the Osborn Playground, the girl and her father were approached by the five suspects, one of whom pointed a gun at the father and instructed him to leave. The father then took off and went to a nearby corner deli for help, but the clerk refused to let him use the phone, even though he said he needed to call the police, according to reports from a local NBC affiliate.

Meanwhile, the girl was left to be brutally attacked by the men, each one taking turns raping her at gunpoint.

The father eventually found a patrol car parked on a nearby street and summoned the officers for help. They returned to the playground where the girl was being assaulted, but the suspects fled on foot and were not immediately apprehended by authorities.

The girl was taken to a local hospital to receive treatment for injuries consistent with a sexual assault of that magnitude. Her family, who declined to talk with reporters, simply said through a closed door that she was doing okay.

After interviewing the victim, investigators discovered surveillance video from a nearby bodega that captured images of the attackers minutes before the assault. Authorities turned over the images to the media in hopes that the public would help to identify the suspects. Less than 24 hours later, four of the five suspects, all ranging in age from 14 to 17 years old, were in custody. Two of the suspects were turned in by their own parents, while the other two turned themselves in and the fifth remains at large.

None of the suspects’ names have been released at this time and charges are pending. City officials reacted to news of the attack with repulsion, abhorrence and outrage.

“I am disgusted and deeply saddened by the horrific attack that took place in Brownsville Thursday evening,” said New York City Mayor Bill de Blasio. “Every New Yorker in every neighborhood deserves to feel safe and protected, and we will not stop until the perpetrators of this disturbing attack are held accountable for their actions.”

City Council Member Laurie A. Cumbo pleaded with the residents of New York to cooperate with authorities during the investigation.

“When an 18-year-old girl can get raped while walking with her father in a park by five men in Brownsville, New York, we have hit an all-time moral low in the City of New York,” Cumbo said.