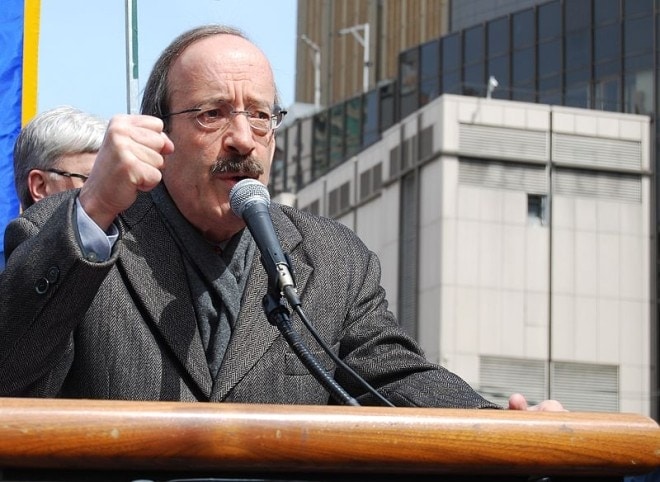 “Congress has a responsibility to do much more to stop the illegal flow of guns across the U.S.–Mexico border,” says U.S. Rep. Eliot L. Engel who welcomed a new report on gun trafficking. (Photo: Thomas Altfather Good/Wiki)

A report issued this week by the U.S. Government Accountability Office contends over two thirds of the guns given by Mexican authorities to the Bureau of Alcohol Tobacco Firearms and Explosives to trace in recent years originated in the U.S.

Of that figure, 73,684, or 70 percent, were found to have originated in the United States. The report goes on to explain most were purchased legally and about 41 percent came originally from Texas gun shops. This has Engel seeing red and calling for action.

“With at least 70 percent of firearms recovered at Mexican crime scenes coming from the United States, our Congress has a responsibility to do much more to stop the illegal flow of guns across the U.S.-Mexico border,” he said in a statement. “Unfortunately, House Republicans continue to be much more concerned with loosening already lax gun regulations than protecting citizens in both of our countries from gun violence.”

As noted in the report, law enforcement on both sides of the border are concerned about homemade guns, for instance AR-15s and AK-47 pattern rifles made from partially completed receivers originating in the U.S., contributing to Mexico’s gun problems. This has Engel proposing ATF do more to turn off this supply in a way that may have wider implications for gun owners in the states looking to build their own firearms.

“To stop this dangerous trend, I urge the Bureau of Alcohol, Tobacco, Firearms and Explosives (ATF) to use their discretion in defining what constitutes a gun ‘receiver.’ Far too often, unfinished gun receivers are minimally modified to avoid regulation,” said Engel.

One talking point in the Congressman’s remarks, it should be noted, is factually incorrect. The figure cited by Engel of “70 percent of firearms recovered at Mexican crime scenes coming from the United States,” is a product of his office and not the GAO, which clearly states in the report that the 70 percent figure is from guns submitted by Mexican authorities to the ATF for trace, and only guns believed to have come from the U.S., such as those from gun makers located in America or with customs marks from U.S.-based importers, were so investigated.

Which leads to an entirely different question of perspective.

How many guns are confiscated a year in Mexico

Putting a hard number on just how many weapons are confiscated by authorities in Mexico every year and destroyed by the military is ephemeral, with only glimpses towards a whole leaking out occasionally.

The GAO over the 18 months it compiled their report tried to find the true number of guns taken off the streets in Mexico for the period addressed, but was unable to get a confirmed figure so shied away from comparing the numbers altogether. Nonetheless, they did mention in a footnote that, “According to data provided by the government of Mexico, Mexican authorities seized 158,560 firearms from 2009 to 2014. However, we were unable to independently verify the reliability of these data. Therefore, we did not compare figures provided by Mexican authorities to ATF tracing data.” 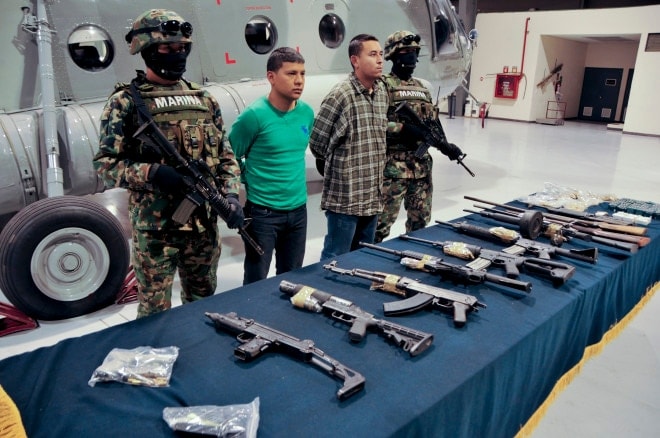 Guns seizures in Mexico often make headlines, but hard figures on how many are taken off the streets are illusive. (Photo: SEMAR)

In 2008, Mexico reported to the Organization of American States they destroyed 28,302 firearms and 745 grenades as part of a crackdown in illicit small arms trafficking that year. Despite this, a 2009 Associated Press report stated the Mexican military still had some 305,424 confiscated weapons locked in vaults.

The Swiss-based Small Arms Survey puts the figure at 253,239 guns impounded in Mexico by authorities from late 1994 to mid-2012 for an average of about 14,000 guns per year. The think tank put the blame on illegal weapon imports into the country on a mix of foreign gangs, Asian sources, local illegal production and guns coming over the U.S. border.

A subsequent U.S. Department of Justice report puts the figures of 154,943 firearms reportedly seized by Mexican authorities overall between 2007 and 2011, for a much higher average of 38,485 guns per year. Further sources of illegal arms are the Mexican military itself.

As noted in a 2007 LA Times article, as many as one out of eight soldiers in the Mexican Army desert their units, sometimes taking their guns with them while others who remain in the ranks occasionally sell firepower for quick cash. Further, last year the Mexican Defense Ministry, who run the country’s only legal gun store, was implicated in the illegal sale of German arms in the Mexican state of Guerrero.

Finally, the GAO reported that concerns about corruption within Mexican government agencies often limit U.S. officials’ ability to develop a full partnership with their Mexican counterparts in the pursuit of curtailing firearms trafficking.

Guns.com reached out to the Defense Secretariat in Mexico City, the Mexican Embassy in Washington and the ATF for more insight into these figures but has not received comment.