President Obama’s final State of the Union Address went an hour long and contained an empty chair for the victims of gun violence, but didn’t really mention gun control.

Coming just a week after announcing a list of executive actions on guns, the President only mentioned gun violence just once Tuesday night, when, early in the address, he included it in his list of things his administration will work on it his final year, saying, “And I’ll keep pushing for progress on the work that still needs doing. Fixing a broken immigration system. Protecting our kids from gun violence. Equal pay for equal work, paid leave, raising the minimum wage. All these things still matter to hardworking families; they are still the right thing to do; and I will not let up until they get done.”

However, among the 24 chairs in First Lady Michelle Obama’s guest box, besides the first female reservist to earn the Ranger Tab and Paris train hero Air Force Staff Sgt. Spencer Stone was an empty chair dedicated to victims of gun violence.

As noted by the White House earlier in the week, the seat was set aside for, “the victims of gun violence who no longer have a voice – because they need the rest of us to speak for them. To tell their stories. To honor their memory.” 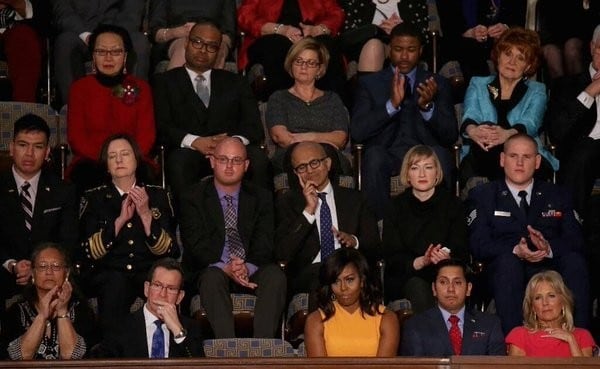 The last time an empty seat was set aside at the State of the Union address by the White House was in 2003 when a chair in then-First Lady Laura Bush’s box symbolized “the empty place many Americans will always have at their tables and in their lives because of the attacks on Sept. 11, 2001.”

News of the Obama dedication in turn led to a social media push, backed in part by former New York Mayor Michael Bloomberg’s Everytown group to show who would occupy the ‪#‎EmptySeat‬ in their home.

The Citizens Committee for the Right to Keep and Bear Arms slammed use of the empty seat, portraying it as a case of political theater.

“The use of an empty chair is an empty gesture by a president many people consider an ‘empty suit’,” said CCRKBA Chairman Alan Gottlieb in a statement emailed to Guns.com. “It’s essentially cheap theatrics aimed at stirring the emotions of his far left base, and like so many of his other efforts, won’t accomplish a thing.”

Gottlieb suggested the President instead should have given the seat to a first responder or law-abiding gun owner.

“There are plenty of armed citizens and police officers who could easily fill that empty seat, providing examples of empowerment,” said Gottlieb. “It would send a message from the administration that we don’t think people should be victimized. But the president isn’t interested in recognizing the deeds of good guys with guns. He’d like everyone to believe they are safer without the protection of a firearm, or someone carrying a gun.”

Others on the right argued the seat could have been used for alternative dedications. Fox News Radio host Todd Starnes suggested “unborn victims of Planned Parenthood” while Instapundit’s Glenn Reynolds offered up Ambassador Chris Stevens, killed in the 2012 Benghazi terror attack.

In the Republican rebuttal to the President’s address, delivered by South Carolina Gov. Nikki Haley, noted for her support of gun rights issues, the governor touched on the mass shooting suffered in her state at the Mother Emanuel church in Charleston but cautioned the President on overreach concerning the right to bear arms and state’s rights.

“We would recognize the importance of the separation of powers and honor the Constitution in its entirety,” said Haley. “And yes, that includes the Second and Tenth Amendments.”

While House Speaker Paul Ryan was stoic during much of the address, GOP front-runner Donald Trump tweeted that the speech “is really boring, slow, lethargic — very hard to watch!”