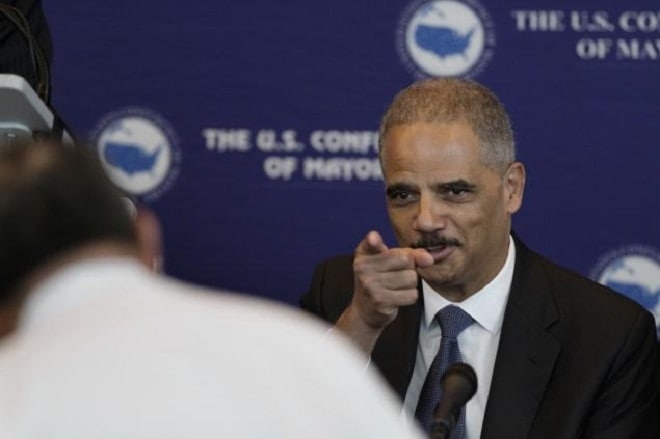 Eric Holder is supporting the candidacy of former Secretary of State Hillary Clinton for the Democratic presidential nomination and will appear with her at campaign stops. (Photo: Danny Johnson/AP)

The news was released by the Clinton campaign in a statement to media on Wednesday.

As detailed by the Associated Press, the former AG, who served alongside Clinton for a number of years in the Obama administration’s cabinet, will appear alongside Clinton in South Carolina at state Democratic Party dinner Saturday and a Sunday debate sponsored by NBC News and the Congressional Black Caucus.

Holder’s statement of the endorsement both praised Clinton and vilified any potential Republican candidate, making a note of gun control in both cases.

Our next president can’t shy away from building on the progress of President Obama, which is why Hillary Clinton is the candidate that we need in the White House. She has the experience and right judgement to deliver results for families across the country. I’ve seen her deal with the issues that will confront the next president firsthand, and she has bold plans to address police brutality, fight for commonsense reforms to our gun laws, get incomes rising, and make colleges affordable. If we have a Republican president, they would tear down our progress on civil rights, health care, and curbing gun violence. It can’t and won’t happen under Hillary who has spent her life taking on the toughest fights.

As the nation’s 82nd Attorney General, Holder had a long history of controversial stands on smart gun technology, states’ rights, contempt of Congress citations in the Fast and Furious gun walking scandal, and other issues.

He was both the first African American to hold the position of U.S. Attorney General and the only cabinet member in U.S. history to be held in contempt of Congress.

Since leaving government office, he has returned to private practice with the same law firm he worked at before becoming Attorney General. That firm, Covington and Burling, represents several large banks that Holder, as the nation’s chief law enforcement officer, declined to prosecute for their role in the finical crisis.

Besides the Holder endorsement, on Tuesday the Brady Campaign to Prevent Gun Violence came out swinging in support of Clinton, debuting a website to extol the virtues of their choice as candidate.

“More than any other candidate on either side of the aisle, she has the experience, record, and demonstrated commitment to help reach our goal of cutting gun deaths in half by 2025,” said Brady President Dan Gross in a statement.

Last October, the Brady group honored Clinton at a gala, presenting her their Cuomo Visionary Award for going the extra mile for gun control.