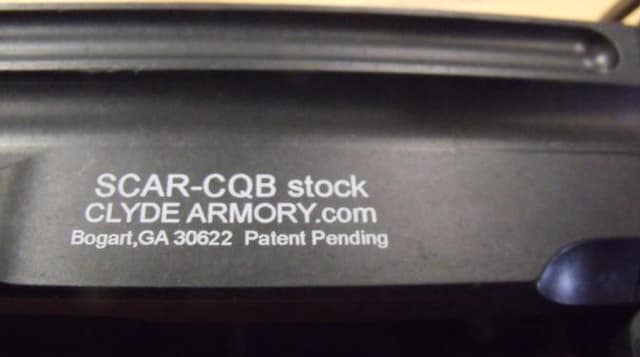 A Clyde Armory “SCAR-CQB stock” that was sold on a gun auction website. (Photo: Gun Auction)

According to the civil complaint filed Dec. 30 in a Virginia federal court, the store, Clyde Armory, Inc., broke agreements that were approved by a federal court in Georgia last year for its continued use of FN’s trademark for the SCAR rifle without permission. The agreement states that Clyde Armory has “no interest in or right to use” FN’s trademark without permission. The company is asking for an award dictated by the agreement and other costs.

The design was the subject of an FN lawsuit last year against Clyde Armory that ended with the court ruling in favor of the gun maker. After a bench trial, the court determined that Clyde infringed on FN’s design and barred the retailer from further use of the design.

The FN trademark — the wording SCAR or SCAR-CQB — has been patented and registered with the federal government since 2010, after the company won a competition for military contracts with the SCAR rifle.

According to a report by Intellectual Property Law Daily, Clyde Armory began working with Sage International, Inc. to develop replacement stocks for Sturm, Ruger & Co. products. As a reflection of collaboration, Clyde Armory began stamping replacement stock designs as “SCAR-Stock” in 2006 even though they knew of the FN SCAR and the military contract.

As a result of the lawsuit, a judge ordered Clyde Armory to cease any use of SCAR, SCAR-Stock or any colorable imitation of those marks. Also within those guidelines, Clyde Armory was ordered to destroy inventory and other materials applicable to the ruling.

Including the FN suit, Clyde Armory was the subject of two federal court cases in the past three years. Owner of the Atlanta-based retailer, Andrew Clyde, testified before front of Congress to discuss the circumstances that led the Internal Revenue System to unfairly seize his bank accounts. Per federal law, deposits and withdrawals over $10,000 must be reported to the IRS. Clyde sued the agency and in return was awarded damages, an apology and the IRS changed its procedures.