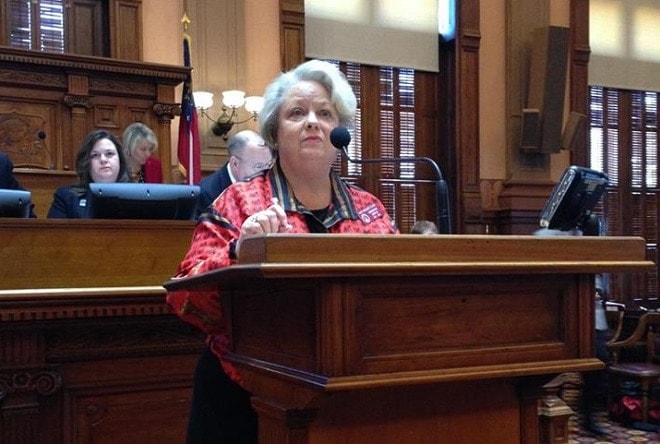 A collection of lawmakers in the Georgia House are proposing a sweeping ban on some semi-auto firearms and their magazines, saying they aren’t needed for deer hunting.

The bill, filed on Monday, is backed by 15 Democrat female House members and would prohibit the possession, sale, transport, distribution, or use of guns classified under it as “assault weapons” as well as detachable magazines capable of holding an arbitrary number of cartridges and some types of ammunition.

“Georgia needs debate about these weapons which are only used for rapidly killing people,” said Rep. Mary Margaret Oliver, D-Decatur, the legislation’s author. “Assault weapons are not necessary for deer hunting.”

Oliver’s proposal, HB 731, was filed on the first day of the 2016 session and is filled with a number of provisions that could make it one of the strongest bans of its kinds ever offered. Besides a list of guns banned by name, any semi-automatic rifle with a detachable magazine and one or more cosmetic feature would be prohibited. Similar rules apply to handguns and shotguns.

Unlike assault weapon bans established in other states, there is no provision for grandfathering affected guns or magazines already in circulation in Georgia. Those with prohibited items would be mandated to move them out of state, modify them to comply with the law, destroy them, or hand them over to state police.

Varieties of .50-caliber ammunition broadly classified under the bill as incendiary or armor piercing would be banned.

The Georgia Bureau of Investigation would be empowered to seize guns, ammo and magazines listed under the ban and while the bill outlines enhanced penalties for those with assault weapons that would include imprisonment for a mandatory minimum of two years. Those found with prohibited magazines would incur a $100 fine for the first offense and a felony for subsequent violations.

Gun owners in the state are outraged over the proposal. Eric Blandford of the popular Georgia-based IV8888 YouTube gun reviews channel railed against the measure on social media, calling it a “sorry excuse for a gun law.”

State gun rights groups feel the measure is dead on arrival in a Republican-controlled legislature but is useful in the respect that it exposes the agenda of the left.

“We are not too concerned about this bill passing but are thankful to the Democrats for introducing the bill,” Georgia Carry Executive Director Jerry Henry told Guns.com Thursday. “They have finally confirmed that they do want to take our firearms as this bill would not only ban many firearms, it would direct the state to confiscate the firearms they don’t want us to own as well.”

Henry says the move shows how gun control advocates and the lawmakers who support them lack a true understanding of Second Amendment rights.

“One could easily see that they want the Second Amendment to read ‘…the right of the people to keep and bear arms shall not be infringed, so long as the Democrats agree with you owning them.’ They can no longer hide under the banner of gun safety laws and their support for the Second Amendment,” said Henry.