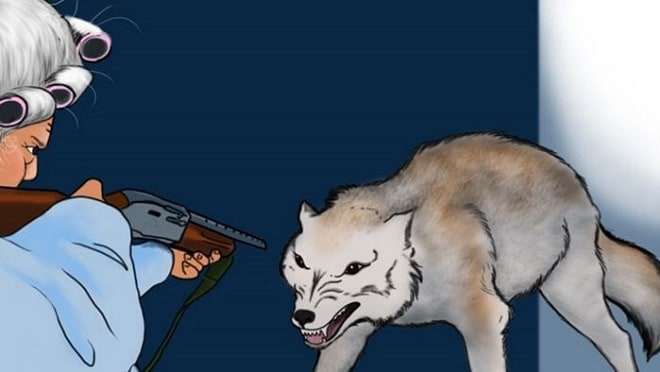 “Speak into the microphone, I didn’t quite make out what you said there, Mr. Wolf…”

A retelling of the childhood classic fairy tale in which a young girl outwits a Big Bad Wolf, retold with Grandma having a scattergun, really seems to rub some people the wrong way.

The story comes as part of NRA Family’s promised recasting of classic fairy tales which, instead of a grim ending (or should we say, Grimm?), the hero refuses to be a victim and uses a firearm to save the day. Titled, Little Red Riding Hood (Has a Gun), author Amelia Hamilton saves Grandma– who wound up being slowly digested by the Big Bad Wolf in the original– through the use of a shotty.

“What big teeth you have!” Grandma said, as his fierce jaws came near.

“The better to eat you with!” the wolf threatened.

The wolf leaned in, jaws open wide, then stopped suddenly. Those big ears heard the unmistakable sound of a shotgun’s safety being clicked off. Those big eyes looked down and saw that grandma had a scattergun aimed right at him. He realized that Grandmother hadn’t been backing away from him; she had been moving towards her shotgun to protect herself and her home.

“I don’t think I’ll be eaten today,” said Grandma, “and you won’t be eating anyone again.”

Well, you get the point.

Anyway, as soon as the story hit the Internet with a signal boost from left-leaning Media Matters, gun control advocacy groups to include Gun Lobby Watch and the Coalition to Stop Gun Violence flipped their lid.

Maybe they though Gran made better Big Bad Wolf skat than living defensive gun use survivor.

The funny thing is, in the NRA’s version, “The huntsman took the wolf away, leaving Red and her grandmother alone at last,” where as in the more traditional telling of the story a woodcutter comes and cleaves the beast with an ax, which is perhaps more traumatic to young readers. But hey, give the people what they want the brothers Grimm always said.

Here are some of the more truly outraged reactions below.

Anyone remember the "My Parents Open Carry" book? This is like that, only somehow weirder and a bit scarier. If you…

Posted by Coalition to Stop Gun Violence on Thursday, January 14, 2016

Absolutely sick. This is how the gun lobby promotes gun culture.

Posted by Repeal the Second Amendment on Thursday, January 14, 2016

Posted by Parents Against Gun Violence on Friday, January 15, 2016