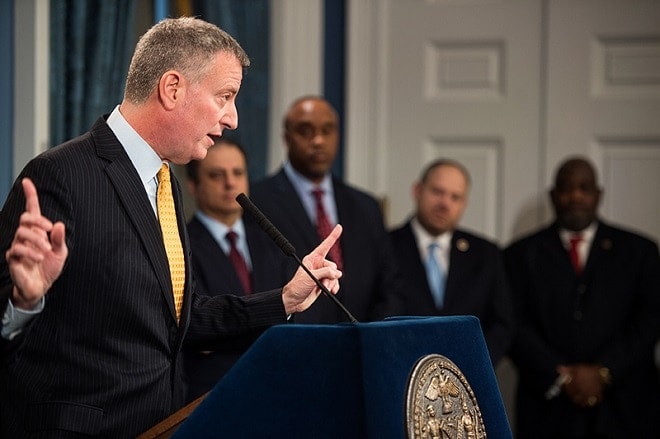 “When somebody makes a decision to pick up a gun, that’s like a pre-murder case,” says gun control advocates backing the new system.

On Tuesday, the Mayor’s office announced the formation of the New York Police Department’s new Gun Violence Suppression Division as well as “Project Fast Track” which will see a dedicated group of judges to hear gun cases within six months.

De Blasio, despite the city enjoying record-low crime rates, paints the move as putting the screws to street gangs and those who use illegal firearms.

“New Yorkers in every neighborhood in this city are united in their desire for safe streets,” said de Blasio, a member of former New York Mayor Michael Bloomberg’s Mayors Against Illegal Guns group, in a statement. “To the few individuals responsible for New York City’s remaining gun violence, our message is clear: you will be found and you will be quickly prosecuted to the full extent of the law.”

The multifaceted approach from City Hall will see a new division formed of 200 NYPD personnel drawn from across the department tasked with cracking down on illegal gun sales in the 15 police precincts with the highest rates of gun violence.

In a separate effort, the NYPD’s gang unit will begin to share intelligence with the federal Bureau of Alcohol, Tobacco, and Firearms to root out possible illegal gun activity.

Another 21 employees will be added to NYC’s Office of the Chief Medical Examiner along with $2 million in funding to allow that agency to swab all guns recovered by police in the city for DNA evidence moving forward.

Once a gun case it built by police, dedicated teams of prosecutors will present them to judges in special “gun courts” established under the project with the goal of clearing the log-jam of defendants awaiting trial on these charges. As noted by the Mayor’s office, over 200 individuals are currently in city jails with pending cases averaging nearly a year.

Two courtrooms in State Supreme Court in Brooklyn, along with two judges, Suzanne M. Mondo and Cassandra M. Mullen, will tackle the backlog as reported by the New York Times.

Retired judges may also be welcomed back to the bench as the program expands.

“We will get away from this notion that some gun cases are mere possession cases,” said Richard M. Aborn, president of the Citizens Crime Commission of New York City, a supporter of the program. “When somebody makes a decision to pick up a gun, that’s like a pre-murder case.”