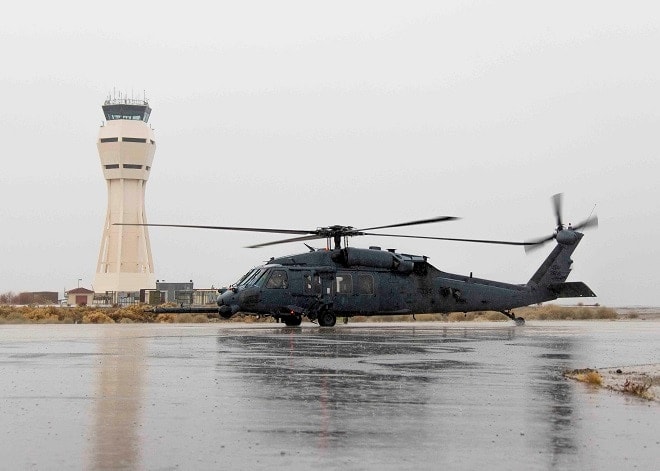 The Air Force is testing a souped up version of the venerable .50 caliber machine gun for use on their fleet of HH-60G Pave Hawk helicopters.

The service’s inventory of about 100 Pave Hawks are spread out across active, reserve and guard units but are primarily tasked for search and rescue. When on a combat search and rescue (CSAR) mission, Pave Hawks carry either 7.62x51mm or .50 caliber M2 (GAU-18) machine guns to help calm things down if coming in hot.

Now this week, as reported by 412th Test Wing Public Affairs, a Pave Hawk has arrived at Edwards Air Force Base in California to test the ballistics dispersion of a GAU-21 machine gun in an effort to get a bigger bang for the buck on these rescue birds.

Further, according to the Air Force, the GAU-21 is preferable due to its open-bolt design which reduces risk of cook-offs after prolonged firing while the GAU-18, due to its closed-bolt design, does not.

The testing is part of the Air Combat Command’s “HH-60 Defensive Weapons System Upgrade” modification proposal, which could see both forward-firing GAU-21s, similar to those mounted on the Army’s retired OH-58D Kiowa Warrior scout helicopters, as well as pintel mounted guns

GAU-21’s are in current use with Navy MH-60R Seahawk aircraft, which uses the same airframe as the Pave Hawk.

As noted by the Air Force, Pave Hawks continue to deploy as needed in support of operations in Afghanistan, Iraq and Libya.